Nora and I spent two and a half days in Puerto Varas, a small port city in The Lakes District‘s south. The rain let up here and there, but the clouds were more stubborn and we were lucky to steal quick looks at the picturesque Volcán Osorno that the city boasts in the pages of guidebooks and on the fronts of postcards.

We spent the days exploring the city, climbing to the top of a park hill or patiently waiting by the water’s edge to catch a better view of the volcanoes. One morning, we sipped hot tea at a lakefront café and watched the clouds as they parted; first, slightly to show Osorno’s tippy-top, then more to expose almost its entirety before closing in on it again until the volcano disappeared completely … all in 20 minutes time. We took a tour of the breathtaking waterfalls of  Saltos del Petrohué and up Volcán Osorno in the thick of all the foggy clouds. And we spent the nights relaxing, drinking Chilean beer on our hostel’s porch with new friends and a “Sandlot”-esque dog named Butch.

A snapshot of Puerto Varas, Chile: At times, the massive volcáns Osorno and Calbuco are daunting guards who stand watch protecting Lago Llanquihue, their shimmering treasure. But more often, the giants are instead childlike creatures who spend the whole afternoon playing peek-a-boo behind the clouds. Escaping the volcanoes’ reigns, the lake’s blue-grey waters run uninhibited to the edge of the world, blurring into the depths of the distant horizon. The whole city smells of its freedom: fresh water dancing in the breeze. A few blocks from the shore, roses take over with scents so strong you don’t have to stop to smell them. Their colorful elegance sits modestly among full hydrangeas in the perfectly manicured gardens of German homes. 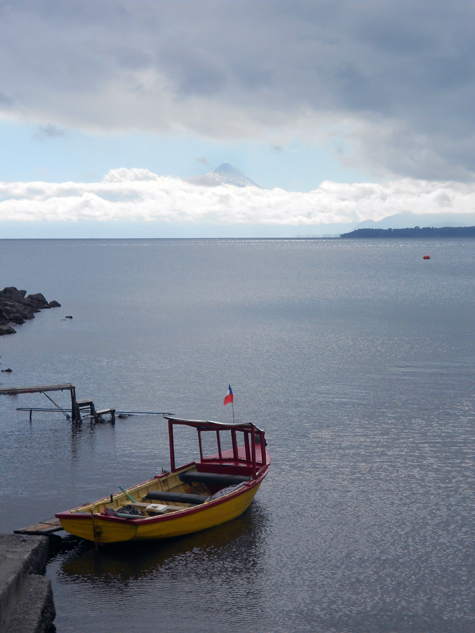 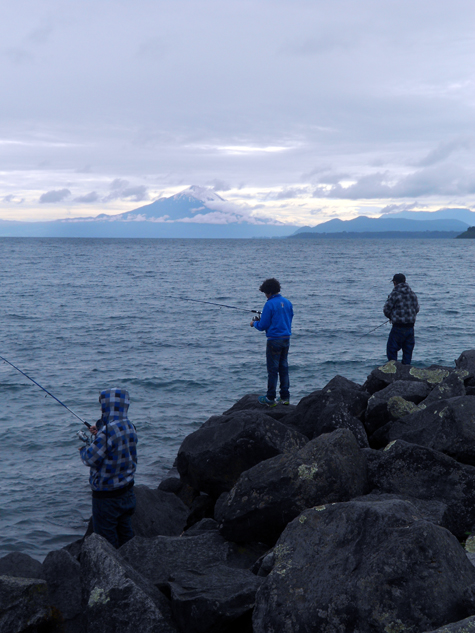 Three young local boys hoping for a catch in Lago Llanquihue as the clouds give way to Volcán Osorno for a few minutes.

While most of Chile’s south is ripe with German influence, Puerto Varas is particularly rich with that culture. In the 1840s, the Chilean government invited German immigrants to the area as their country was amidst a revolution. About 40,000 Germans settled in Puerto Varas and the surrounding cities, leading to many Chilean-German unions and families who still live in the area today. In fact, Casa Azul, the hostel where we stayed is run by a Chilean-German couple. That German influence is felt throughout the area’s cuisine of meats and architecture of wooden shingles. Several of the historic German mansions have been transformed into museums. All the homes are lined with beautiful gardens that make the whole place smell like flowers. I remember walking the streets, amazed I could smell so many roses in the air. I later learned the town is fittingly called “The City of Roses.” 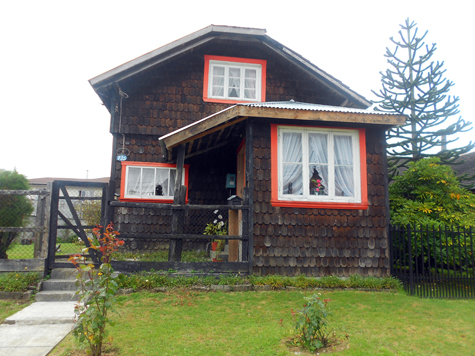 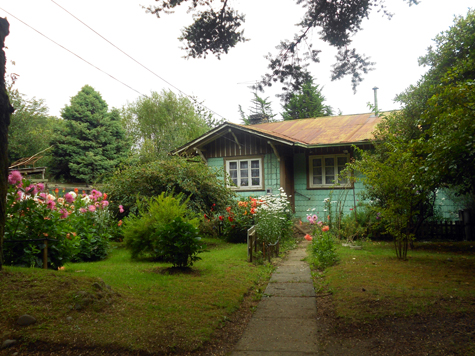 A house and its rose garden, so perfect it’s as if it’s on a movie set. 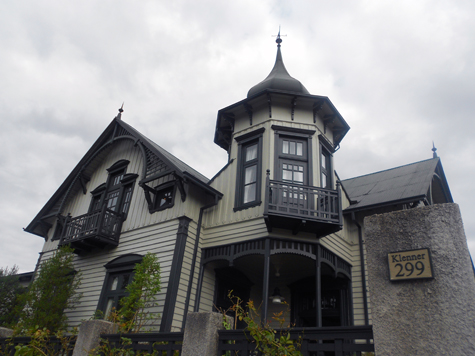 One of the famous German houses turned history museum. 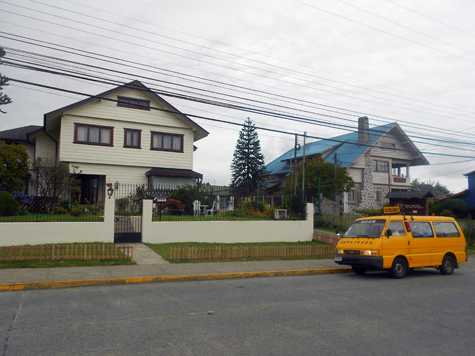 A school bus dropping off children.

You can see power lines draped above the streets in this cute neighborhood, but if anything, I think they add to the idyllic feeling of it all. The city’s downtown was a different story, with thick lines clumped so tightly together the sky seemed to have a black holes shooting through it. It unfortunately made the town seem far less attractive than it actually is by the shore or in its residential neighborhoods. The journalist in me couldn’t help but wonder: “Is this a fire hazard? This is a problem, right?” 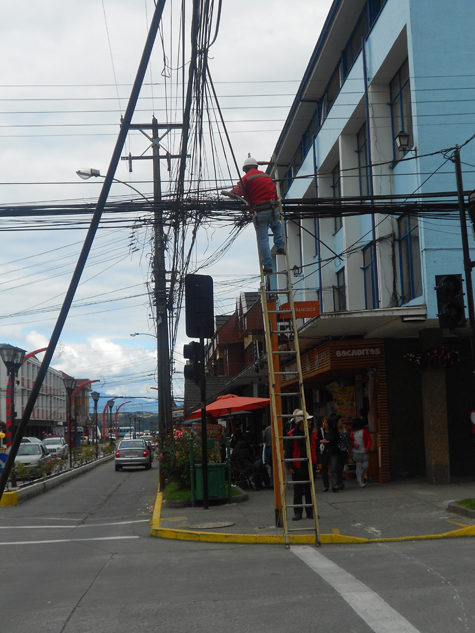 Seriously, this can’t be safe.

I’ll never forget overhearing a group of old ladies as they stepped off their tour bus and onto the lakefront in Puerto Varas: “I thought you were supposed to see a volcano. I don’t see a damn thing!” It’s true that the clouds played a vanishing act quite often. Here’s a couple photos I took in the same exact spot on two separate afternoons. 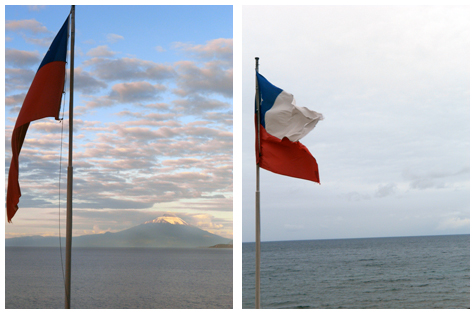 Now you see it, now you don’t.

It was Day 6, just past the half-way point of our trip and it hadn’t stopped raining. But when we arrived in Puerto Varas, all we saw was sunshine. Giddy, we decided to spend the day outdoors climbing a park hill rumored to have the best view of the city and the volcanoes that sit at the base of Lago Llanquihue, South America’s third-largest natural lake. Although Volcán Osorno was still quite stubborn, Volcán Calbuco came out in full stride to top off a fun afternoon in a quiet mini-forest. 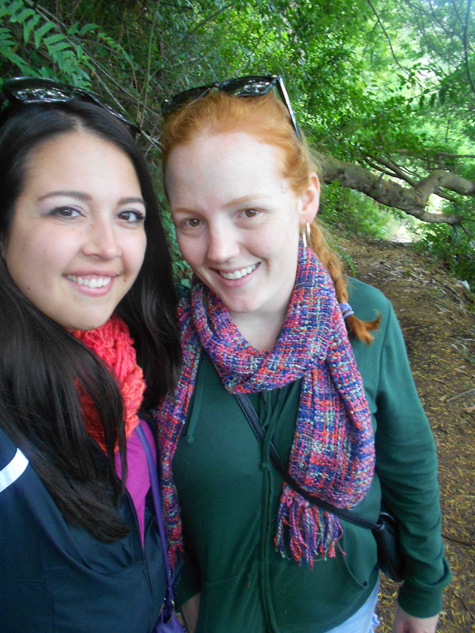 Nora and I on our little walk through the woods. 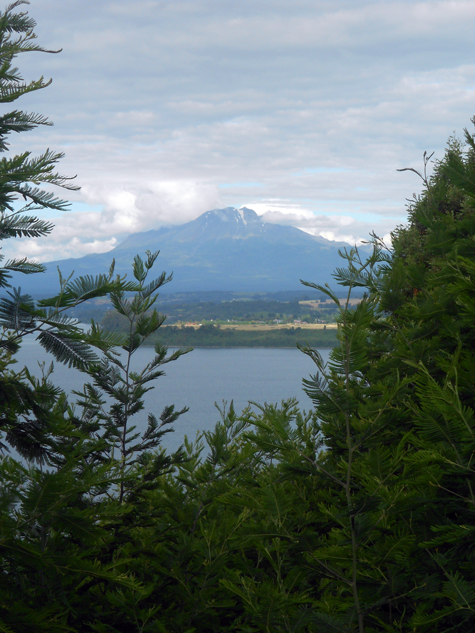 Volcán Calbuco came out for a bit. 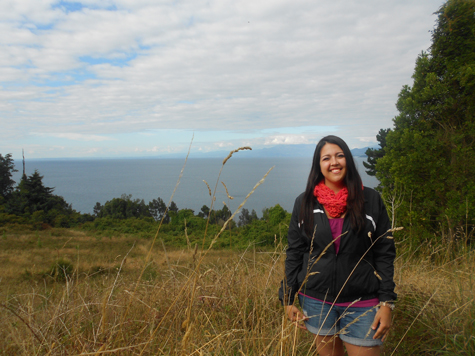 At the top of the hill in Parque Phillipi. Of course, Volcán Osorno is hiding.