I can still honestly say I am lucky to have coincidentally visited Castro during Festival Costumbrista, despite it likely being the reason I wound up calling 37 hostels (while standing outside in the rain). The annual festival is held in various towns on the Isla de Chiloé in February, and celebrates the history and culture of island life. For an entry fee of about $1.25, we listened to live traditional folk music, watched locals weave and form unique apple-wood baskets, shopped at an artisan market, visited farm animals and learned to cook (and taste!) authentic island food. Normally, I wouldn’t be so thrilled about the latter in this country … but the Chilotes are one group of Chileans that know how to cook. 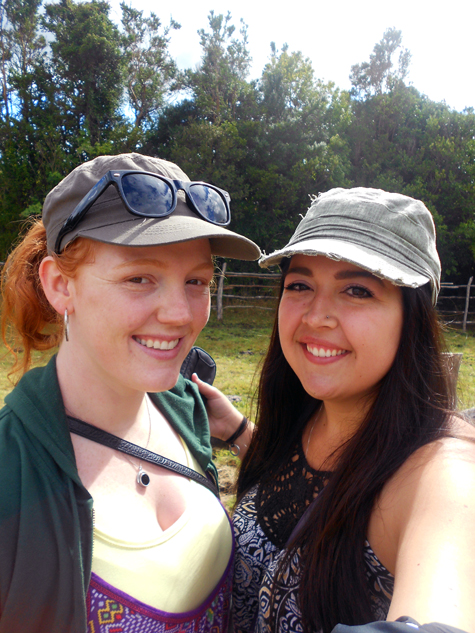 Soaking up a bit of sun at Festival Costumbrista.

With so many sheep on the island, quite a trade is made of their wool. Every stand at the feria (market) featured tons of stuff hand made from wool: tapestries, scarves, sweaters, hats, socks, earrings, etc. The craftswomen also explained that there are different ways to process the wool to create effects in the material. For example, when processed with tree bark, as it often is, the wool transforms to a stiff, rough texture. 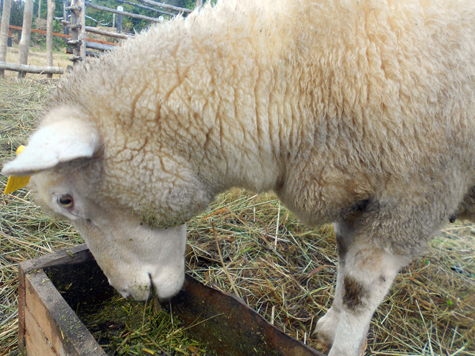 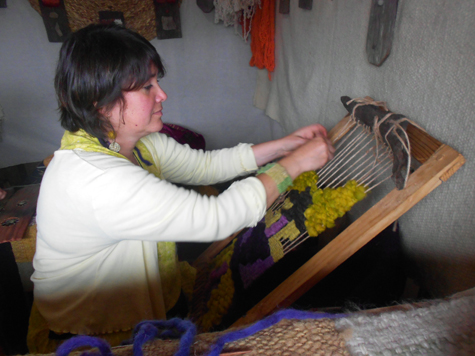 Aside from the sheep, other animals are useful for various products … like pigs! Chileans love their pig meat. The live ones can be awfully cute, but the dead ones are awfully tasty. 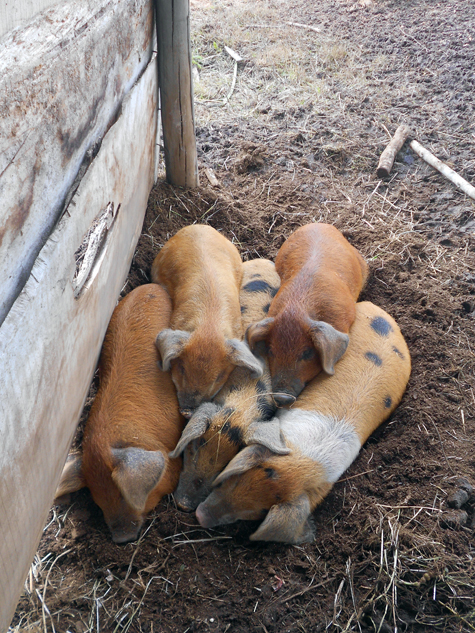 A pile of piglets! 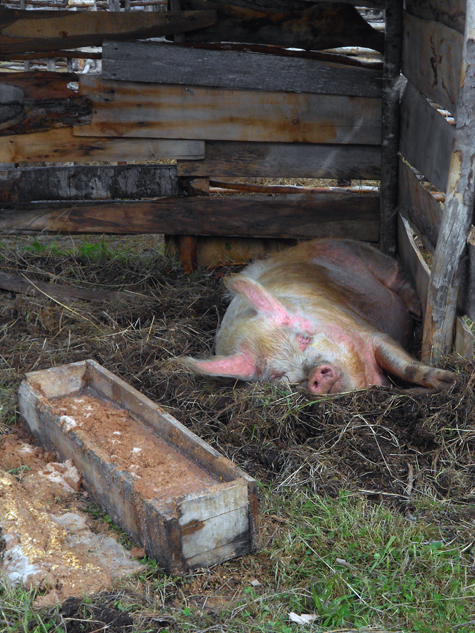 No matter the country, I am a journalist through and through. Peeking in the gaps between stands and the spaces between slats, I noticed natives preparing meals behind each food vendor. Intrigued, I started walking from stand to stand on the backend instead.

“I don’t think we’re supposed to be back here,” Nora said, a bit concerned.

“What do you mean?” I replied. “This is great. Could you do me a favor and ask them what they’re making, how and whether I can take a picture?”

(Nora’s Spanish is MUCH better than mine, so she is often thrown into quenching my curiosity. I don’t know what I’d do without her!) 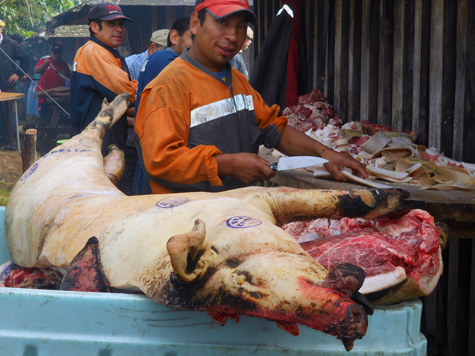 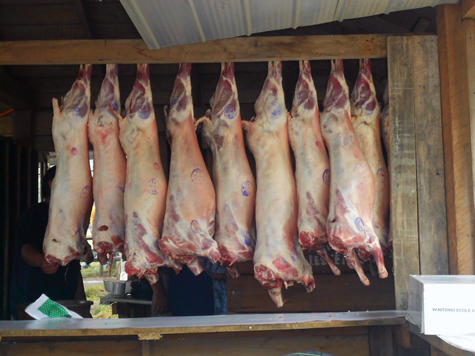 With my trusty red-headed friend in tow, the locals were just as curious about us as we were about them. They welcomed us to the back of their stands and explained how to make everything they were cooking. One couple even offered to let us try it ourselves. We only turned the meat in this smoker for about three minutes, but generally someone manually churns the beef for at least two hours. 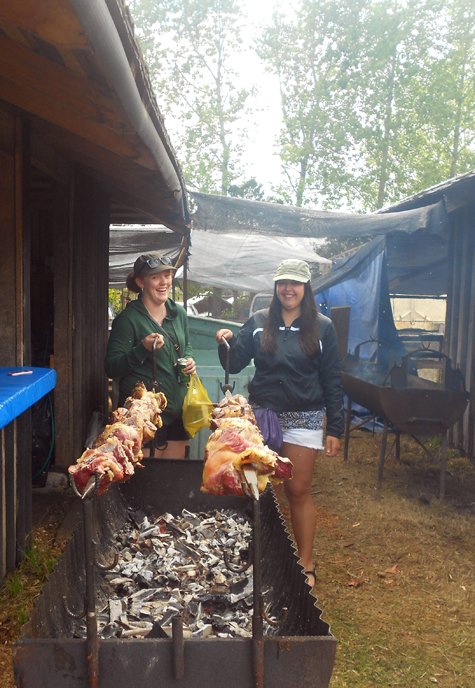 We are now certified meat smokers.

It’s a lot harder than it looks.

A traditional dish on Isla de Chiloé is curanto: shellfish, sausage, red meat, dumplings and potatoes smoked in plant leaves over hot rocks in the ground. It’s hard to find the meal made genuinely these days, but the festival paid homage to the authentic preparation. The curanto cost us $8 USD and was more than enough for us to share.

1. Prepare the earth with burning wood and hot rocks in a pit for about about an hour.
2. Cover the rocks with local plant leaves called “nalca,” a relative to rhubarb.
3. Add the shellfish, meat and potatoes.
4. Layer the food with more leaves.
5. Cover the pit with a tarp and hot soil to seal in the heat.
6. Smoke the contents for about an hour.
7. Serve steaming. 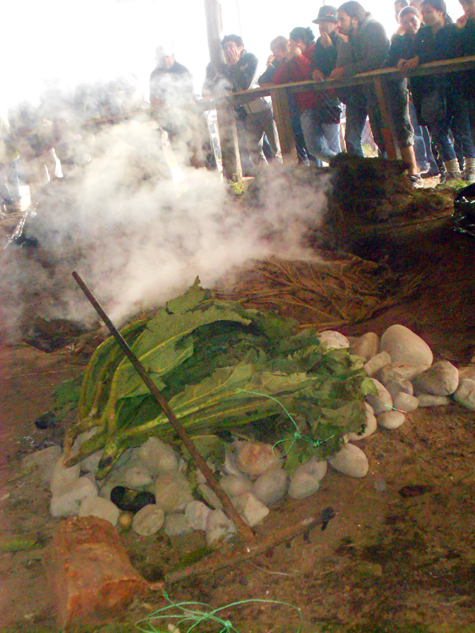 Curanto covered in leaves cooking in the ground. 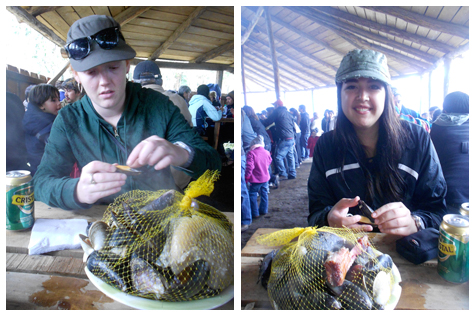 Nora (left), who hadn’t really tried seafood before this moment, is a little unsure about the situation. But I’m pretty happy about the freshly steamed mussels. Yum!

Although the curanto and meat selections were delectable, the chochoca wins first prize in my book … but I am admittedly a little bread biased. Chochoca is a fluffy, warm potato bread filled with a dab of smoked meat. Mmmm! Anyone who can find out where to get this in Santiago will win a prize yet to be determined (It will be a good prize, I promise). For a slice of chochoca, it cost about $2.50-$3.00

1. Peel and chop potatoes.
2. Mash potatoes in floury-bread dough substance.
3. Mold dough around wooden barrel.
4. Turn barrel over fire pit for about an hour, while the meat simmers in a separate pot.
5. Insert meat in roll.
6. Serve hot. 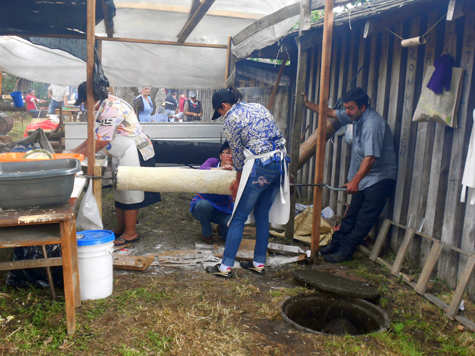 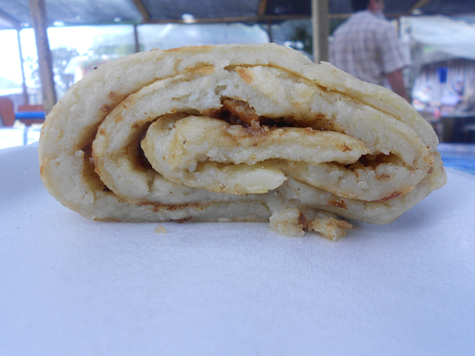 Chochoca: The most amazing bread on the planet.