I received polarizing reviews on whether to visit Chiloé, an archipelago of more than 40 islands. A friend of mine said he loved the beautiful island, and could spend a month there if he had the chance. A fellow traveler said he heard it was boring unless you were 80 years old and liked to visit churches. Nora and I decided to go for it anyway, and were glad we did. We spent two days of our Lakes District tour on the island and loved it. We visited one church and instead soaked up the island culture through its annual Festival Costumbrista, which was coincidentally in town for the weekend.

A snapshot of Castro, Chiloé, Chile: A patchwork of farms and green pastures for herds of sheep cover the never-ending hills of Isla de Chiloé. Castro, a quaint town in the center of the main island, sits on the coast of bay waters. Palafitos, shacks on wooden stilts, stick out along the water like half-used oil pastels jutting up unevenly in the box. The tide draws back and forth in drastic measures, a wavy mirror for the puffy clouds above. Marking a day of scattered showers, a vivid rainbow stretches from the coast to the farthest hill as if it was painted with heavy strokes across a grey canvas. A touch of sunlight tints the hills a golden shade while rustling leaves play subtle music on sleepy mornings. By midday, the air is saturated with folk music and smells of meat smoking over burning logs. 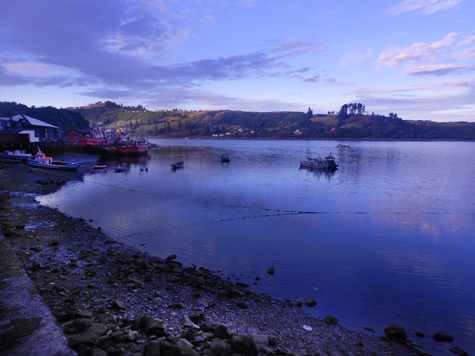 No caption necessary. Dusk and so beautiful. 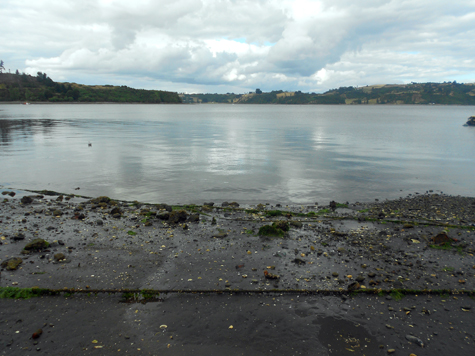 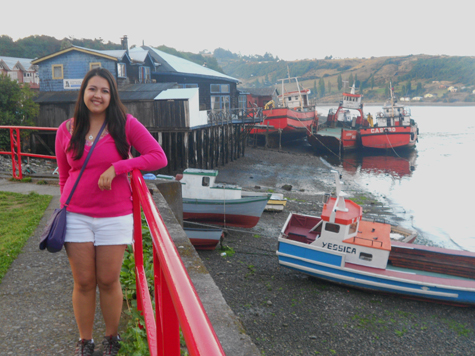 Castro is famous for its palafitos, or houses built on wooden stilts. The design prevents flooding on the coast and allows fishermen to moor their boats right up to their doorsteps. Many of these unique homes were destroyed in the 1960 earthquake, but several others remain inhabited despite their decaying facades. When the tide went out, we took the amazing opportunity to walk the sandy beach for an up-close look at the tiny dwellings propped up to tower far above our heads. It was eye opening to see that they weren’t all postcard perfect, but rather many were in quite poor shape with peeling paint, rusted tin shingles, broken windows and even some without doors. 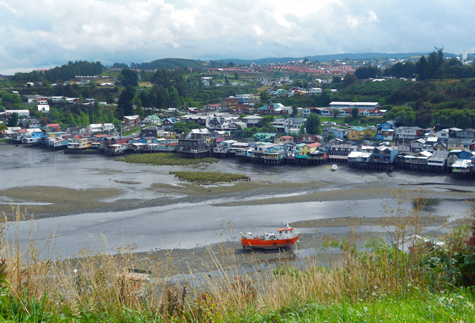 Palafitos … our hostel is tucked on this far side of the city. 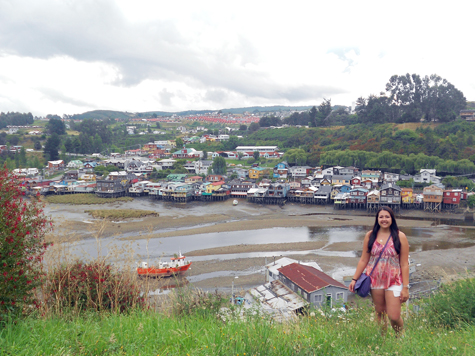 More palafitos (and me!) 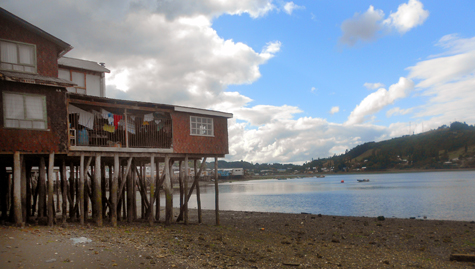 Clothes line drying on the porch of a palafito. 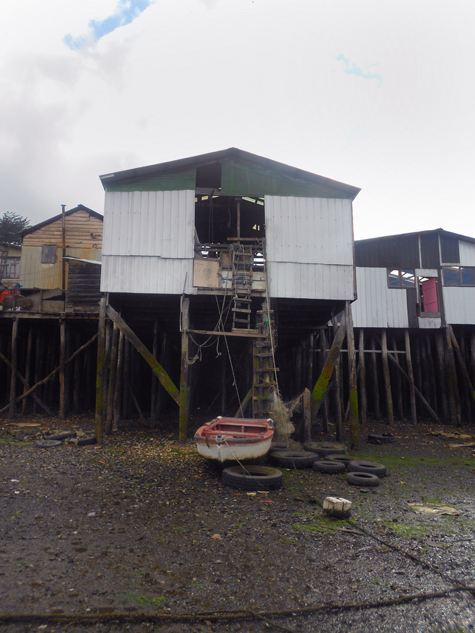 This fisherman’s house is the perfect example of why the palafitos were constructed. When the tide is high, this little vessel floats to the surface and the fisherman steps from his door to his boat. 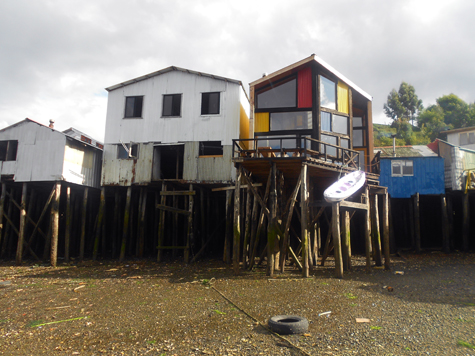 The pretty, colorful palafito is a hostel. The rest are homes. 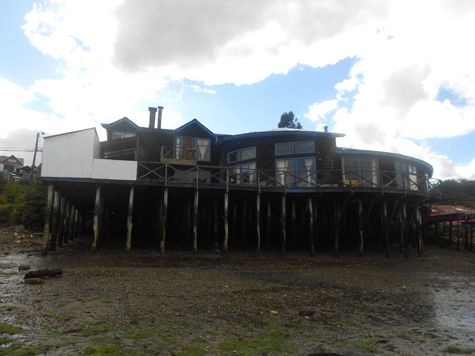 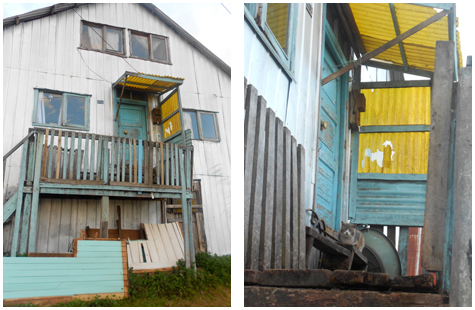 Not a palafito, but I love this house … even in its rather shabby state.

Chiloé is scattered with historically-rich churches, which were built as the Jesuit missionaries traveled spreading their beliefs in the 17th and 18th centuries. We visited the island’s iconic structure, Iglesia San Francisco, in the center of Castro. The monumental church was built in 1910 entirely from local woods, such as alerce and cypress, and features confessional boxes hand-carved by native artists. Its two 130-foot bell towers provided a landmark guide for ships arriving in the port, and are still Castro’s tallest structures today. Inside, it featured a mini-museum of the island’s other churches, complete with detailed wooden models and descriptions, such as the fact that some of the churches were built without using a single nail and are still standing today. So … we got to learn about the culture and history without being “80-year-old women” and touring dozens of churches all day. 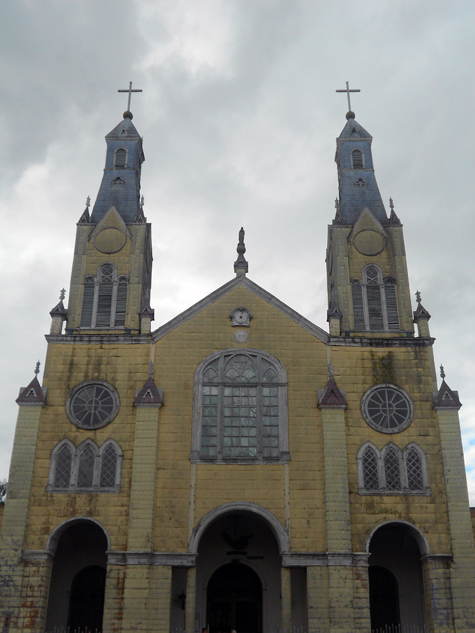 While traveling comes with plenty of perks, it’s not without its challenges. Such was the case in Castro. Take standing outside in the pouring rain in order to call hostels from the list, which is only visible from outside the tourist center for example. Why the only list of hostels is only available outside the tourist center of a town that is perpetually rainy is a good question. If only standing in the rain was the challenge …

Me: *dictating phone number of a hostel to Nora.

Nora: (In beautiful Spanish) Hello, do you have two beds available for tonight and tomorrow? (pause) No? What about just tonight? (pause) No? OK, thank you.”

Repeat that exact process for all 20 hostels, and 17 of 20 hospedajes. Yes. We found a room after calling 37 places in the rain. Thirty-seven, and the two of us, type A worrying, orderly planner-types did so calmly. If only you could hear our inner monologues … they were not so calm to say the least. But, we both kept our appearances for the sake of the other, knowing that if one of us broke down it wouldn’t be pretty. And in the short instances where one of us started to vocally worry, the other assured that it’d work out. We make a pretty good team!

All of the hassle was worth it. We ended up in a family-run hospedaje in the last room in all of town. It was on the far side of the city at the bottom of a huge hill. From the top, we had an amazing view of the coast that we otherwise would not have seen. And the hospedaje gave us plenty of laughs and memorable stories in itself. Seems those optimists just might be right after all: “Everything is always OK in the end, and if it’s not OK it’s not the end.” 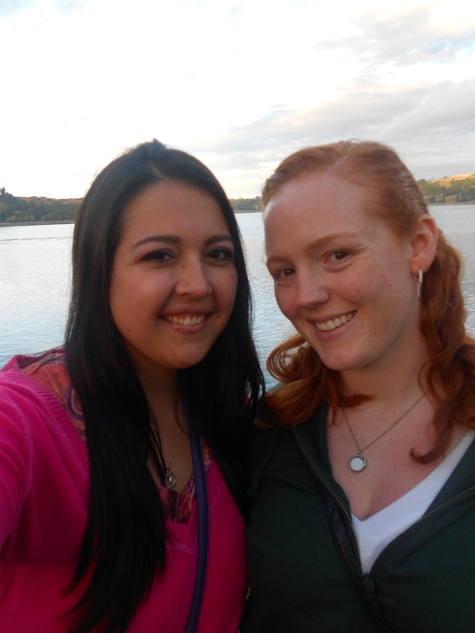 We make a pretty great team! 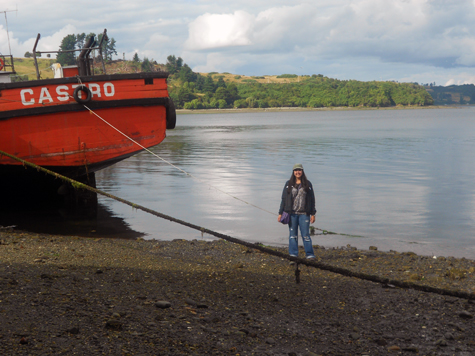 Me on Castro’s shore