I am a runner.

Sometimes, I still can’t believe that it’s true. Even after my first race, a 7K, about two months ago, I hesitated to say the phrase or negated it with “but I’m new at it” or “but I’m slow,” because being a runner is someone I never thought I could be.

Now, I proudly know I deserve the title: runner.

I may still be relatively new at it and am certainly not as fast as many others — but — I run. And I still can’t help but smile with unfiltered pride when I think of how far I’ve come after not being able to finish running 1 kilometer just six months ago. 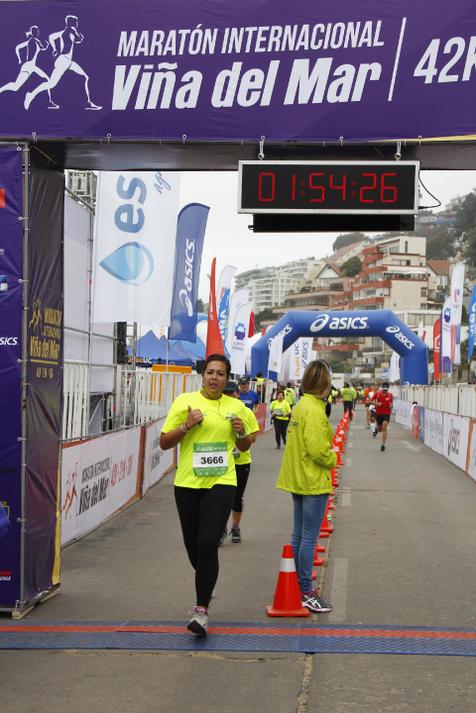 Actual Chip Time: 1:05:45 /  I wish the clock in the photo said my real time! A chip in the # bib tracks your actual pace with a sensor. Ooh I love technology! (The full marathoners started first plus we were late for our 10K gun start.)

After finishing the 7K without stopping to walk in August, I decided I was ready to pick up the pace. For the past two months, Nora has been pushing me to keep up with her during our Tuesday-Thursday running buddy days. A few weeks ago, I finally met the challenge during one of our 8-kilometer hauls. Having a lifelong athlete and literal “beast” as your best friend has its perks. Not only would she take anyone out for me in a second, but Nora also knows just how to motivate me to push to the next level. Amazed at how fast I can run when she’s by my side, I’m still figuring out how to keep up my tempo on days we don’t run together.

I’ve also been training with my friend, Caitlin. We traded in our “Sunday Fundays” of throwing back a few glasses of sangria for “Sunday Rundays” where we scramble up the steep hillside of Cerro San Cristobal. The hillwork has really improved my strength when I run flat. Plus, it’s great to have a little community of motivating “fitness friends!”

Since my first race, I shaved off  about 2 minutes from my mile while also cranking up the distance. 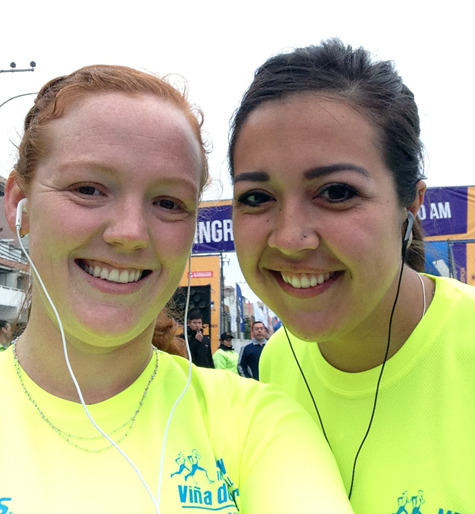 Nora and I assumed that the Maratón Internacional de Viña del Mar would start in Viña del Mar. Wrong.

The starting line was actually in Reñaca, another beach down the road — the road closed for the race. But, organizers and our hostel hosts told us not to worry and that the buses would take a back road to drop us off next to the start. So, we left our hostel in Viña an hour early thinking we had plenty of time to make what is usually a 10-minute trip. Instead, buses filled with runners passed us until one  finally stopped with enough room for more passengers. (By “enough room,” I mean we all piled in against the windshield like sardines in a fish tank). Then, the bus took several windy backroads, stopping to drop off locals in their neighborhoods.

Finally, at 8 a.m. as the 10K was starting, the bus driver called out for the runners to get off the bus. We were still nearly 2 kilometers away from the race.  I guess you can say I got my warm up in.

It was actually great to start so late because I hate being surrounded in a big crowd of people. Plus, all the pushing at the front gate and running with the pack isn’t my thing. And with the chip sensors on our number bibs that register your start, halfway and finish times, it’s just not necessary to start with the gun. 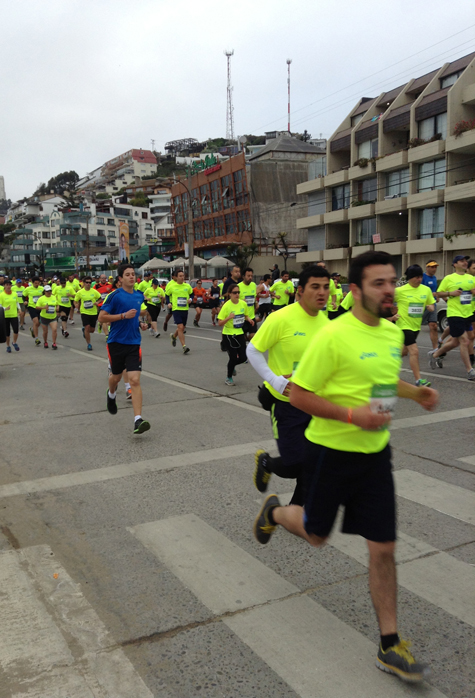 The flood of runners already at it while we jog the opposite way to the start line.

Without a herd of runners around, I could really take in the beautiful course that stretched along the Pacific Coast. Clouds covered the sky and the sea breeze flapped my hair. People dressed in silly costumes, from cows to vikings to super heroes, cheered us all on from the sidelines. Bands, including a group from the Chilean Navy, beat their drums to give us the strength to keep on going. The people waving flags screamed “vamos” (let’s go!) not just for the marathoners but even when a pack of 10k-ers sped by. Eventually, some full marathoners, who started about 45 minutes before me and had run to the port city Valparaíso and back, caught up to me on their 18th kilometer (my 6th) for what provided even more inspiration.

The day was perfect.

I felt great, kept a good pace and never had the feeling that I was just too tired. After a rocky start, all the elements seemed to align to create what was truly an incredible race day. 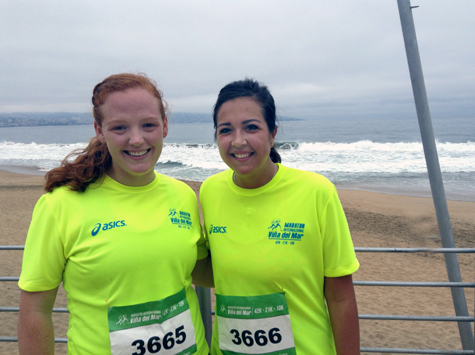 The coastal course had a beautiful view! 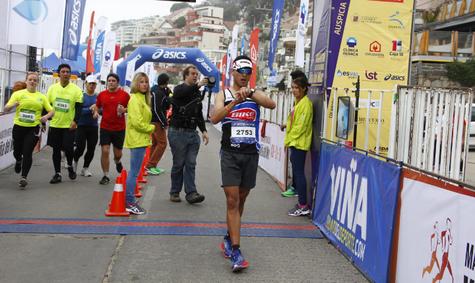 Nora, left, being a beast and passing everyone at the finish line at 57:35.

The only thing missing was my cheerleaders. While it’s inspiring to have strangers root for you, strangers just aren’t your mom or little brother who have cheered you on for every big accomplishment throughout your life. They of course filled my Facebook feed with encouragement and well wishes before the race, and the show of support from my friends after announcing my 7K was overwhelming. Sometimes I forget how far I really am from home while technology fills in the gaps. Since living abroad for nearly two years now, I have more or less passed the constant homesickness phase and have forgotten how it can still sneak up on you at the strangest times. Like crossing the finish line of your first 10K .

I am lucky enough to be a little slower than my best friend who truly had to cross the finish line alone, where she then waited and argued with some security guard so she could stand there to cheer me on when I finished a few minutes later.

Although this race reminded me how difficult it can be to live so far from home, it was also another show of the incredible connections I’ve made here and how much I’ve changed throughout this journey. 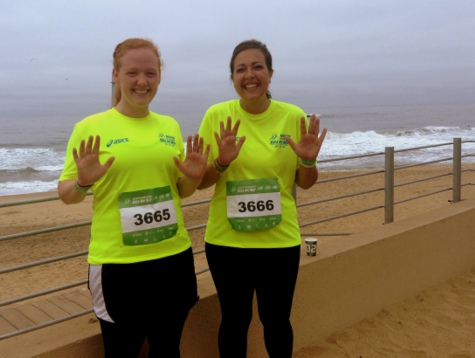 ← It’s the most wonderful time of the year
Costa Rica: Somewhere in the middle →