Backlog for driver’s licenses irks many

Download the PDF of the story as it appeared in print
in the Las Vegas Review-Journal.

By Jessica Fryman and Ed Vogel

Kara Baldonado has slept outside four times in recent weeks, longing to win the hottest ticket in town — the chance at a driver’s license.

First-time Nevada drivers now have to wait up to a month and a half to schedule a driving test, forcing those who need a license sooner to bear the overnight standby line.

Baldonado moved here from Hawaii in June and started as a cellular molecular biology major at the University of Nevada, Las Vegas this week. She didn’t need a license when she lived on the Big Island with her parents, but now the 18-year-old rooms with her older sister, who is in the Air Force and doesn’t have time to drive her around. Waiting weeks for an appointment means missing classes. 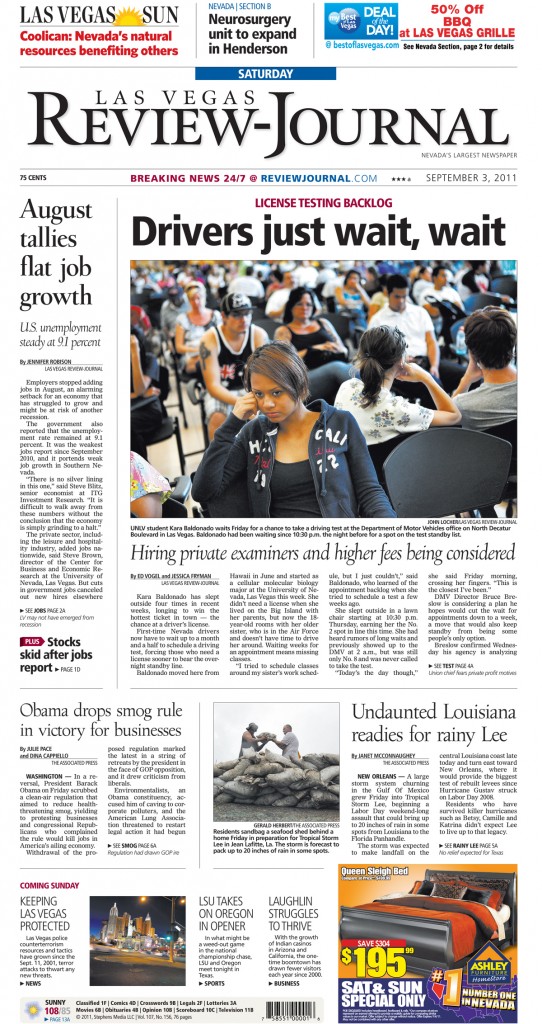 She slept outside in a lawn chair starting at 10:30 p.m. Thursday, earning her the No. 2 spot in line this time. She had heard rumors of long waits and previously showed up to the DMV at 2 a.m., but was still only No. 8 and was never called to take the test.

“Today’s the day though,” she said Friday morning, crossing her fingers. “This is the closest I’ve been.”

DMV Director Bruce Breslow is considering a plan he hopes would cut the wait for appointments down to a week, a move that would also keep standby from being some people’s only option.

Breslow confirmed Wednesday his agency is analyzing whether to use driving examiners from private companies in addition to the state employees who now give the tests. These examiners, who would not work at DMV offices, would charge a higher fee. If his staff determines in coming months that the privatization plan has merit, he said he will ask the 2013 Legislature for permission to let the DMV seek proposals from private companies to administer the tests.

A check of DMV offices across the state Thursday showed would-be drivers have to wait as long as six weeks to obtain a driving test.

Waits in Clark County range from three weeks at the Flamingo office to six weeks on North Decatur Boulevard. In Reno and Carson City, the current wait is almost a month. Yerington and Elko are worse. The next open slot for a test is Oct. 6 in Yerington and Oct. 14 in Elko.

The DMV tells people they can try the standby line if they need an appointment sooner, but sometimes without warning about the wait there. Baldonado advised No. 25 that he should just go home when she overheard he planned to wait it out for the day.

“Wait, if an appointment takes two months, does it take four months for standby,” Ed Strong joked, conceding that because he didn’t bring a sleeping bag he might try the line another day.

The 60-year-old, who recently moved to town from Tennessee, was one of the older faces in the crowd.

Drivers who have a valid license from another state have to take a test if they have more than four moving violations in four years or a drunken driving conviction within seven. New Nevadans under 21 with an out-of-state license have to take the written exam but are exempt from the driving portion.

Most of the people waiting to take the driving test are young, first-time drivers.

The head of a union that represents state employees is not happy about the idea of privatization.

Vishnu Subramaniam, chief of staff for the American Federation of State, County and Municipal Employees Local 4041, said using private examiners to improve service would not save money, based on the state’s experience with a private women’s prison. He also said that private employees could gain access to personal information of drivers and would not be accountable to the state.

“If there is indeed a 2½-month wait, then that’s a staffing issue,” he said. “Let’s get more people doing driving exams now than waiting for outside vendors. All you are doing is increasing the costs for people taking the tests.”

But the DMV is prevented from hiring more staff because of the state’s budget shortfall.

Breslow contends the plan would save money because he does not envision the state paying salaries and benefits for the private examiners. The state would set a maximum fee private companies can charge for each test, which would be given at locations other than DMV offices.

The state charges $25 for a driving test. The rate charged by private companies would be higher, but how much higher hasn’t been determined.

For most people waiting for a standby slot, they said the extra cost probably would be cheaper than taking the day off work to wait in line, which has become a necessity for those who can’t wait weeks to get a license.

Victoria Sexton doesn’t have the luxury of skipping work. When she and her fiance have the same day off, they spend it waiting at the DMV. Although she scheduled an appointment more than a month ago, Sexton has waited in the standby line four times because, she said, she needs her license before her Oct. 11 test.

“It’s a necessity,” the 18-year-old said, admittedly frustrated and sleep deprived after hopping into line at 4 a.m. Friday. “I have a full-time job. I go to school. I am about to get married. This is annoying.”

At No. 6 in line Friday, she was confident she would finally be able to take her test at the Decatur office. But by 11:30 a.m., no one on standby had been called. The first person in line, who got there at 9 p.m. the night before, had already given up and gone home.

Last week, Sexton and her fiance brought their lawn chairs to the Flamingo office at 4 a.m., only to be 19th in line. On another occasion, they waited 12 hours and still had two standbyers in front when the DMV stopped giving driving exams at 4:30 p.m. She was No. 12 that day.

The couple suggest that anyone with a standby number higher than 10 not bother waiting. Standby waiters are only called if there’s a cancellation or a no-show.

“We’re just really tired and want to get this over with,” her fiance, 21-year-old Aaron Kasarjian, said in support of privatizing the testing process. “We want whatever is convenient.

“We live in such a 24-hour, fast paced, ADD society here in Vegas. Companies need to adapt to that.”

Mary-Sarah Kinner, spokeswoman for Gov. Brian Sandoval, said the governor is aware the DMV is studying whether to privatize driving examiners, but he has not yet taken a position.

Last month, Sandoval approved a Breslow plan to let private companies set up 40 to 80 kiosks, or computer terminals, in supermarkets and other public places around the state. At the kiosks, drivers can carry out DMV business such as renewing car registrations without having to stand in long DMV lines. Customers pay extra to use the kiosks.

Subramaniam said he did not object to the kiosk plan, saying it’s convenient for the public. But the union chief fears the private driving examiner plan would be just the start of an effort to privatize more and more state government functions.

“First it is the kiosks, then the driving examiners,” he said. “What’s next?”

He predicted private driving examiners would engage in hanky-panky that does not now exist with state-paid examiners.

“I think you would see more people failing their driving tests since it would be in the best interests of their company to fail drivers and require retests. Now examiners have no financial interest if people pass or not. Their only motive is to try to protect the driving public.”

Driver’s ed companies have said the majority of Nevada drivers fail on their first attempt at the driving test, but DMV officials couldn’t quickly find those statistics. As the system stands now, a failed test means waiting weeks for another appointment or chancing it on standby.

As her 18-year-old son took his driving test for the first time, Darlene Abbott waited anxiously in the lobby — hopeful he would pass so she could get some relief from carting him to work each day. His Friday appointment took six weeks to book, and she took the day off work to take him there.

Then, a solemn teenager shook his head from side to side as he emerged from the parking lot.

“And that’s the part when this wait stinks the most,” Abbott said after consoling her son, who failed his test for speeding 5 mph over the limit and forgetting to use his blinker as he parallel parked. “I guess I’ll be driving him for another six weeks until the next appointment.”