Download a PDF of the story as it appeared in print
in the Kenosha News.

The green and black paint won’t be splashed across the walls of one Kenosha family’s home as planned. The cans will remain unopened in a cabinet for now.

Linda Soto, 50, let her four youngest boys pick the colors for their rooms last week in the first step toward fixing their home — and life.

One year sober from a crack cocaine addiction, Soto said she wants to start over. 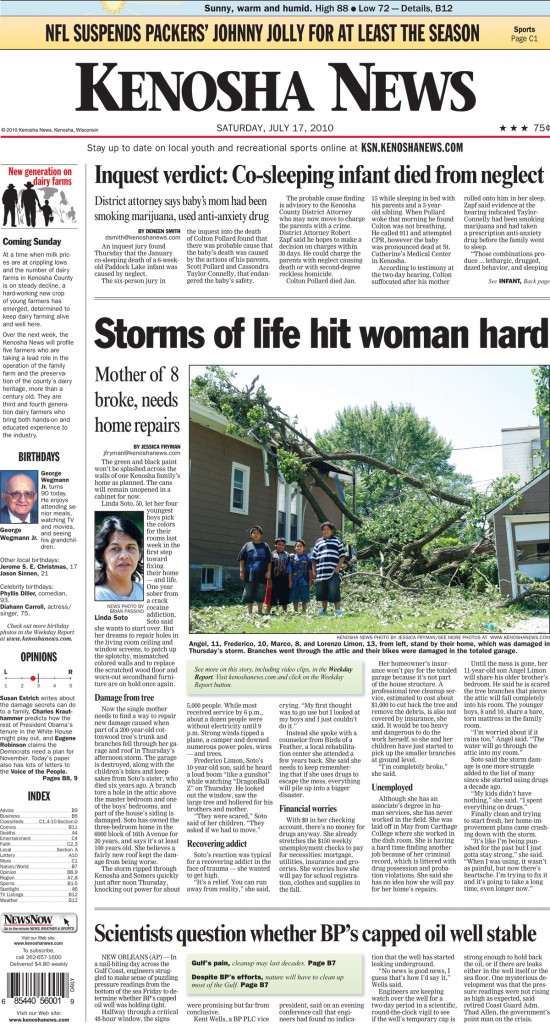 But her dreams to repair holes in the living room ceiling and window screens, to patch up the splotchy, mismatched colored walls and to replace the scratched wood floor and worn-out secondhand furniture are on hold once again.

Damage from tree
Now the single mother needs to find a way to repair new damage caused when part of a 200-year-old cottonwood tree’s trunk and branches fell through her garage and roof in Thursday’s afternoon storm.

The garage is destroyed, along with the children’s bikes and keepsakes from Soto’s sister, who died six years ago. A branch tore a hole in the attic above the master bedroom and one of the boys’ bedrooms, and part of the house’s siding is damaged. Soto has owned the three-bedroom home in the 6000 block of 16th Avenue for 20 years, and says it’s at least 100 years old. She believes a fairly new roof kept the damage from being worse.

The storm ripped through Kenosha and Somers quickly just after noon Thursday, knocking out power for about 5,000 people. While most received service by 6 p.m., about a dozen people were without electricity until 9 p.m. Strong winds tipped a plane, a camper and downed numerous power poles, wires
— and trees.

Frederico Limon, Soto’s 10-year-old son, said he heard a loud boom “like a gunshot” while watching “DragonBall Z” on Thursday. He looked out the window, saw the large tree and hollered for his brothers and mother.

“They were scared,” Soto said of her children. “They asked if we had to move.”

“It’s a relief. You can run away from reality,” she said, crying. “My first thought was to go use but I looked at my boys and I just couldn’t do it.”

Instead she spoke with a counselor from Birds of a Feather, a local rehabilitation center she attended a few years back. She said she needs to keep remembering that if she uses drugs to escape the mess, everything will pile up into a bigger disaster.

Financial worries
With $9 in her checking account, there’s no money for drugs anyway. She already stretches the $150 weekly unemployment checks to pay for necessities: mortgage, utilities, insurance and groceries.

She worries how she will pay for school registration, clothes and supplies in the fall.

Her homeowner’s insurance won’t pay for the totaled garage because it’s not part of the house structure.

A professional tree cleanup service, estimated to cost about $1,000 to cut back the tree and remove the debris, is also not covered by insurance, she said. It would be too heavy and dangerous to do the work herself, so she and her children have just started to pick up the smaller branches at ground level.

Unemployed
Although she has an associate’s degree in human services, she has never worked in the fi eld. She was laid off in May from Carthage College where she worked in the dish room. She is having a hard time finding another job because of her criminal record, which is littered with drug possession and probation
violations. She said she has no idea how she will pay for her home’s repairs.

Until the mess is gone, her 11-year-old son Angel Limon will share his older brother’s bedroom. He said he is scared the tree branches that pierce the attic will fall completely into his room. The younger boys, 8 and 10, share a bare, torn mattress in the family room.

“I’m worried about if it rains too,” Angel said. “The water will go through the attic into my room.”

Soto said the storm damage is one more struggle added to the list of many since she started using drugs
a decade ago.

“My kids didn’t have nothing,” she said. “I spent everything on drugs.”

Finally clean and trying to start fresh, her home-improvement plans came crashing down with the storm.

“It’s like I’m being punished for the past but I just gotta stay strong,” she said. “When I was using, it wasn’t as painful, but now there’s heartache. I’m trying to fi x it and it’s going to take a long time, even longer now.”

This story was originally published in the Kenosha News
on July 17, 2010.