Download a PDF of the story as it appeared in print
in the Kenosha News.

TWIN LAKES — Kevin Costner at Country Thunder? You mean the real one? The actor?

The questions were endless before the famous movie star took the stage with Modern West, his country band that most in the audience didn’t know existed. Some even preemptively compared Costner’s presence at the festival to Jessica Simpson, who performed two years ago to many disappointed patrons who said she didn’t “fit” with the rest of the lineup.

While he wasn’t booed as the pop-turned-country singer was in 2008, Costner’s spot in the lineup didn’t sit well with many people.

But the actor — known for his roles in such films as “Dances with Wolves” and “Field of Dreams” — played up his lesser-known singing talents well, asking the crowd if it was ready to break up the “curiosity party” before he kicked off an hour and a half of slow-moving tunes. 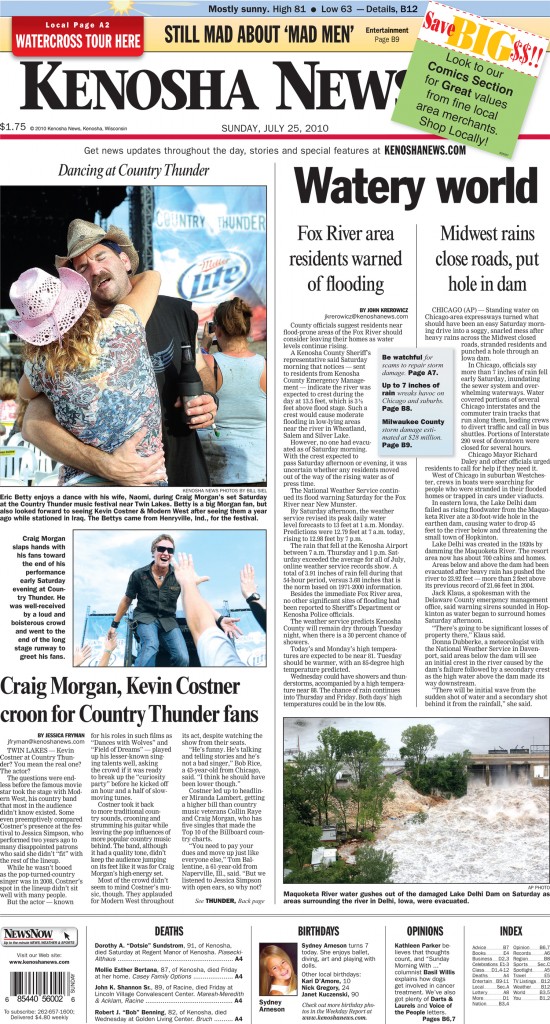 Costner took it back to more traditional country sounds, crooning and strumming his guitar while leaving the pop infl uences of more popular country music behind. The band, although it had a quality tone, didn’t keep the audience jumping on its feet like it was for Craig Morgan’s high-energy set.

Most of the crowd didn’t seem to mind Costner’s music, though. They applauded for Modern West throughout its act, despite watching the show from their seats.

“He’s funny. He’s talking and telling stories and he’s not a bad singer,” Bob Rice, a 43-year-old from Chicago, said. “I think he should have been lower though.”

Costner led up to headliner Miranda Lambert, getting a higher bill than country music veterans Collin Raye and Craig Morgan, who has five singles that made the Top 10 of the Billboard country charts.

“You need to pay your dues and move up just like everyone else,” Tom Ballentine, a 61-year-old from
Naperville, Ill., said. “But we listened to Jessica Simpson with open ears, so why not? Actually Jessica has a pretty good voice, I just don’t like where they put her in the order. That’s the same with Kevin Costner.”

Most of the concert-goers agreed, saying his music isn’t well-known enough for his band to play ahead of a headliner.

Plus, his set slowed the pace down too much between crowd favorites Craig Morgan and Miranda Lambert, some said.

“I kind of got bored, so we left,” said Amy Talamantes, a 30-year-old from Albert Lea, Minn. “At 7 p.m. on a Saturday you have to play to the crowd more. I think Morgan’s awesome. He should have been bumped up.”

Even people who were looking forward to Costner’s set thought the order wasn’t appropriate for a festival focused on music.

“I was all excited when I saw he was going to be here,” said Eric Betty, a 43-year-old Navy chief who
saw Costner perform in Iraq last year.

Betty and his wife tapped their toes to Modern West from their seats, but the couple enthusiastically
danced in the aisles for most of Craig Morgan’s set.

This story was originally published in the Kenosha News
on July 25, 2010.