Download a PDF of the story as it appeared
in print in the Las Vegas Review-Journal.

A kiss on the cheek and a big hug came with every hello from popular bartender Phil Wells.

“He was always so happy and willing to just be everybody’s friend,” said 46-year-old Cecil Kester, a regular customer of The Garage, where Wells, 29, worked.

But early Monday at the gay bar, a place known for making friends quickly was transformed into a site where a dear one was lost. 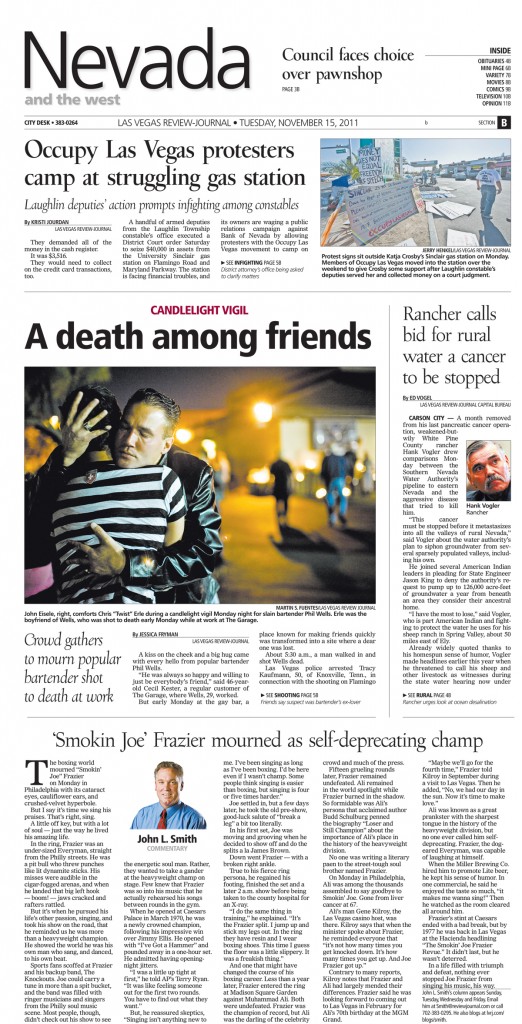 Las Vegas police arrested Tracy Kauffman, 50, of Knoxville, Tenn., in connection with the shooting on Flamingo Road near Maryland Parkway. Official charges will be released today.

Friends of the victim called the suspect his ex-lover who may have been stalking Wells. His friends said they learned the detail from family after his death, as Wells never let on that he had personal issues.

“He always just listened to our problems and helped us with ours,” said Brandon Busche, a 29-year-old regular customer and friend. “He’d give the shirt off his back. He would pull money from his tips to buy me a drink.”

There was one thing Wells did complain about: not enough Dolly Parton songs on the jukebox.

“Anytime you came to the bar, he was always singin’ Dolly,” said Matthew Schatswell, a 30-year-old customer and friend.

Not shy, Wells often sang his favorite Dolly tune, “Islands in the Stream,” a cappella. He, of course, had a season pass to Dollywood, a Tennessee amusement park owned by the country singer.

About 150 customers, friends and family of the bartender gathered to share memories and mourned at a candlelight vigil outside The Garage on Monday night. The bar will reopen at noon today .

Wells’ uncle stepped forward from the crowd to tell the loyal customers they were equally loved. He said he found a gratitude card in Wells’ loft filled with daily notes about all his patrons.

“It’s the bartender’s job to make you feel like you’re the only one in the world,” said Ron Holsey, 46, a customer of The Garage. “He did that. He was an exceptional bartender.”

Wells tended bar in Knoxville for nearly a decade before moving to Las Vegas late last year. Before getting the job at The Garage in April, he worked at Escape Lounge on West Sahara Avenue near Arville Street.

Wells loved to sip cocktails, with margaritas and sangria being recent favorite tastes.

Outside the bar scene, 24-year-old Chris “Twist” Erle, who was dating Wells, said the bartender enjoyed art and talking about philosophy.

He also played softball with a team of other bar employees.

But Wells’ interests always circled back to one thing, Erle said: friends.

“His favorite hobby was to be sociable.”

← Bookmaking and “(A few) Things I learned in college journalism”
Child, mother, ex-boyfriend all found dead in west valley →