Hundreds of teachers wait to hear about jobs

Download a PDF of the story as it appeared in print
in the Las Vegas Review-Journal.

When Dana Bennett crammed school supplies into boxes last week, her baffled 6-year-old daughter asked: “Why are you packing up your classroom? Why aren’t you teaching fifth grade anymore?”

Bennett struggled to find the words to tell her kindergartner: “Because they don’t need me.”

But Bennett can argue that the Clark County School District does, in fact, need her. 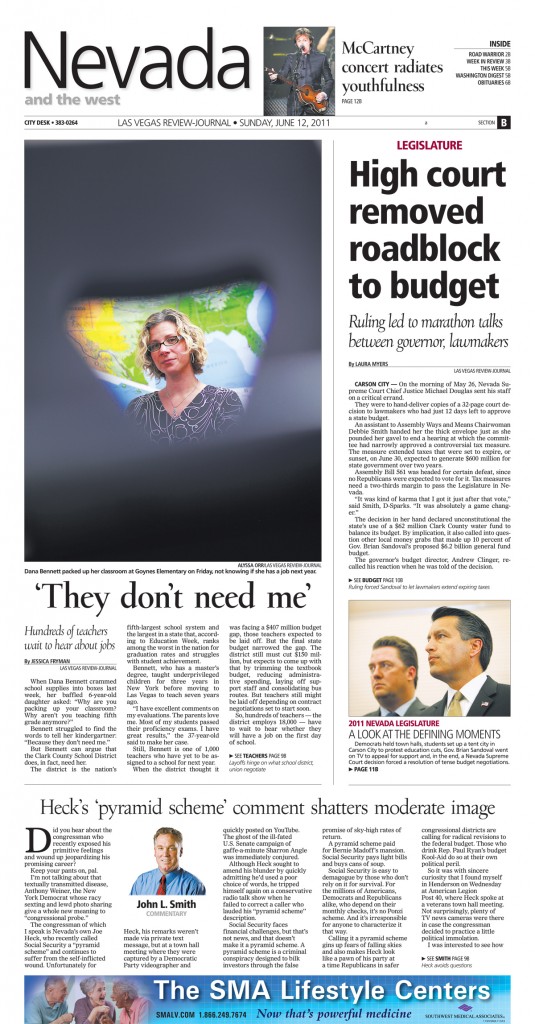 The district is the nation’s fifth-largest school system and the largest in a state that, according to Education Week, ranks among the worst in the nation for graduation rates and struggles with student achievement.

Bennett, who has a master’s degree, taught underprivileged children for three years in New York before moving to Las Vegas to teach seven years ago.

“I have excellent comments on my evaluations. The parents love me. Most of my students passed their proficiency exams. I have great results,” the 37-year-old said to make her case.

Still, Bennett is one of 1,000 teachers who have yet to be assigned to a school for next year.

When the district thought it was facing a $407 million budget gap, those teachers expected to be laid off. But the final state budget narrowed the gap. The district still must cut $150 million, but expects to come up with that by trimming the textbook budget, reducing administrative spending, laying off support staff and consolidating bus routes. But teachers still might be laid off depending on contract negotiations set to start soon.

So, hundreds of teachers — the district employs 18,000 — have to wait to hear whether they will have a job on the first day of school.

Bennett is paid $46,000 a year, a salary that reflects her nearly four years of experience as a district teacher . But she is considered a first-year teacher in seniority after returning in November from a leave of absence she took to stay home with her children.

With only months of seniority being counted, Bennett said she expects to be the first to go. Although the Legislature passed reform ending the “last in, first out” policy, exactly how merit will be considered has yet to be negotiated.

“The whole thing is just horrible,” she said, trying to fight the tears welling in her eyes. “It’s crazy.”

Bennett left her job at a computer consulting firm when she decided she wanted to work with kids. Her acceptance into the New York City Teaching Fellows earned her a fast track to the classroom and paid for her master’s degree.

She started at a multicultural magnet school in South Bronx, N.Y., where she had to learn quickly to be a good teacher. Some of her fifth-graders were in gangs, many had been shot and one was 14 years old in a class of peers at least three years younger.

“It wasn’t just teaching, but learning how to connect with those kids,” she said, adding that they once egged her car. “They taught me a lot. If you can teach there, you can teach anywhere.”

She took that mantra with her when she decided to move across the country to Las Vegas, a place where the economy was booming and in desperate need of teachers in 2004.

She taught fifth grade for seven months before giving birth to her daughter, Emma. With no trouble finding a job about a year later, she returned to the classroom in the middle of the school year. Bennett finished the term and taught writing the next year before giving birth to her daughter, Samara. She extended her allotted leave to stay home with her children, thinking it wouldn’t be difficult to find a position later.

But when she started applying in 2009, the district instituted a hiring freeze as it waited for the Legislature to approve a budget.

“The minute the hiring freeze was lifted I literally ran over here,” Bennett said of accepting a fifth-grade position at Goynes Elementary School in November.

There, Bennett said she liked to keep her talkative fifth-grade class busy with hands-on projects. “Measurement man,” which the kids constructed from colored paper for a unit conversion lesson, hung on a bulletin board. Orange posters featuring student-made fractions lessons adorned a wall. Bennett taught writing to several fifth-grade classes, too.

“Normally writing is such an issue,” said Abbie Creuziger, a fifth-grade teacher whose students attended Bennett’s writing lessons. “I couldn’t even get back to the room before my kids were like: ‘Read this, read this!’ They loved it.”

Bennett said she has enjoyed her experience at Goynes, as much as her students did.

“I live nearby which is great, and I don’t mind bumping into the kids I teach,” she said. “It was the perfect situation and now it’s just gone.”

Less than six months after being rehired, her name appeared on the surplus list.

It is typical for schools to shift teachers to other locations once the final student count is official each year. What’s unprecedented is having hundreds of unassigned teachers facing possible layoffs. While some say the new budget means teachers will be spared, nothing is certain until union and district officials agree on a contract. In the meantime, an estimated 1,000 teachers packed their boxes, unsure whether they will unpack them next fall.

After hearing her job was on the line, Bennett said it proved difficult to go to work each day. She attended planning meetings, but was skipped over when materials on new curriculum or policies for the upcoming year were passed out. Despite the awkwardness, she said she kept attending with the hope that she will have a teaching job.

Other teachers who have been shuffled to other schools said they also feel out-of-place.

Dawn McNeil started teaching at Goynes in 2008, but was bumped to Heard Elementary School a year and a half later. After teaching at Heard for only a year, she received another notice that she would have to change schools again. Later, the administration said her position actually might be saved. But McNeil said she couldn’t handle the stress of the unknown any longer, and accepted a job at a charter school where she will begin next fall.

“After the emotional toll and feeling like a pawn in a game, I decided to get off the roller coaster,” she said.

Bennett said she also applied at charter schools, but hasn’t heard back from any prospects. She estimates they have received hundreds of applications.

With a mortgage and two kids to support, Bennett said she is worried about not finding work. Her husband, also a teacher, is facing a salary cut of up to 9 percent.

“I’ll take any position,” Bennett said. “I’d do anything.”