What do you do when there is no garbage truck?

One thing I still have yet to figure out is what to do with my trash. With no waste management system in the villages, it is no surprise that garbage starts to pile up. 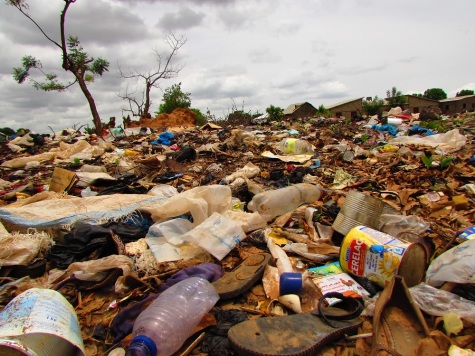 In an effort to curb the unsightly mess, the government issues two clean-up days per month, always on a Saturday from 9 a.m. to 1 p.m. Transportation is forbidden, including private vehicles, and businesses are closed while people are supposed to clean the environment. Apparently, this method works wonders in the city where people actually take to the streets and clean. However, in the village, it is nothing more than an enormous inconvenience. Nobody cleans up and so it is just wasted time when people can’t fetch water, go to the market or travel (and on a Saturday!).

Last year, the government issued a ban on the import of plastic bags, which are used here to hold the miniscule portions in which everyone buys their goods. A handful of salt, a cup of sugar, a few peanuts, laundry soap, drinking water and frozen sweet drinks … you name it, it came in a plastic bag.

It took about a week for Gambians to think up a solution, and I was admittedly impressed with their resourcefulness. They made grocery sacks by stapling together newspaper and they rolled the paper into cones to sell salt, sugar, peanuts and soap. They washed out old plastic bottles for water and they made the frozen sweet drinks into popsicles on sticks.

The plastic bag ban has worked in a number of countries. In Denmark, a tax on plastic bags introduced in 1994, has led to the average resident using just four per year. In Rwanda, the ban was so strict people were fined $150 for using plastic bags and black market smugglers were charged more than $400.

But like many laws in this little country, the plastic bag ban wasn’t enforced and within months they started appearing again. (However, many people still do use an alternative).

It’s not at all to say Gambians are dirty. They spend hours sweeping their compounds and value cleanliness. But, there’s just not a place to put garbage so public spaces quickly become a dump. 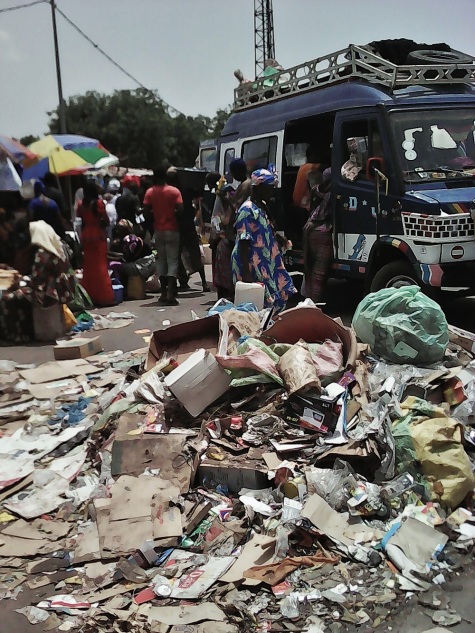 The carpark in Brikama, The Gambia

This conundrum has led to my own resourcefulness and recycling, and I certainly produce far less waste than I ever did before. I burn paper products, but of course I still inevitably have some trash that I just don’t know what to do with. A neighbor had a home-made landfill that I used until overflowed.

Then I would give my trash to my family to deal with, but the private American in me couldn’t get past the fact that I’d see my discarded items pop up again around their house. “One man’s trash is another man’s treasure,” takes on a whole different meaning in the developing world. Broken headphones, old mascara tubes, empty tuna packets and a slew of other unimaginable things became the kids’ prized possessions and I couldn’t stand it for various reasons. Now, I often put stuff down my pit latrine (sorry, Peace Corps) but that is less than ideal because it will fill up faster than it should.

Who knew that one of things I’d most look forward to seeing again in the developed world would be a trash can!