If you missed the bees, you would have mistaken us for one of the teams who had swarmed the region in the wake of Ebola just a few months earlier. Mesh face masks, red rubber gloves, black rubber boots and bulky jumpsuits exposing nothing, hiding even the fear. 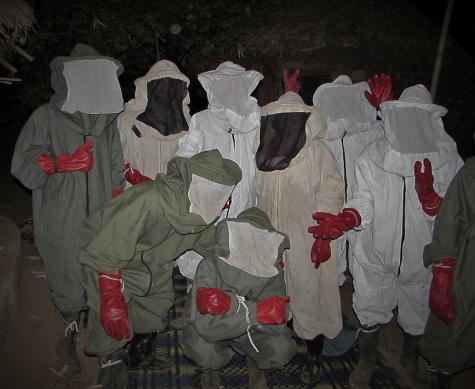 But there was no missing the bees.

The bees whirred in circles around our heads, but the cacophony of wings was merely background noise to my anxious heart thumping against my chest. Bees were there too. Instinctively, I looked down and checked my suit’s zipper. Again. 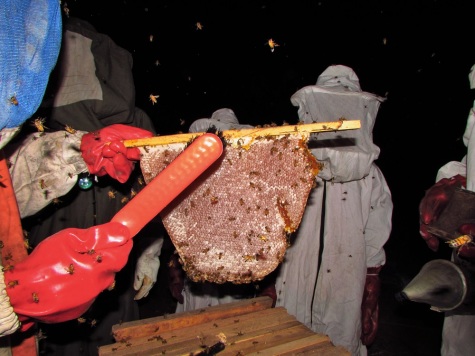 “I think I got stung,” I said to no one in particular, everyone’s faces obscured by our hoods in the darkness.

Then as suddenly as the panic had washed over me, came the calm. Our trainer pointed out different aspects of the honey comb and I was fascinated. 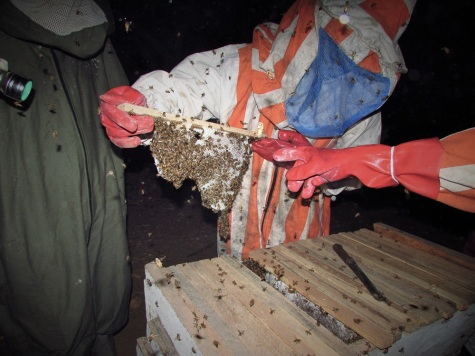 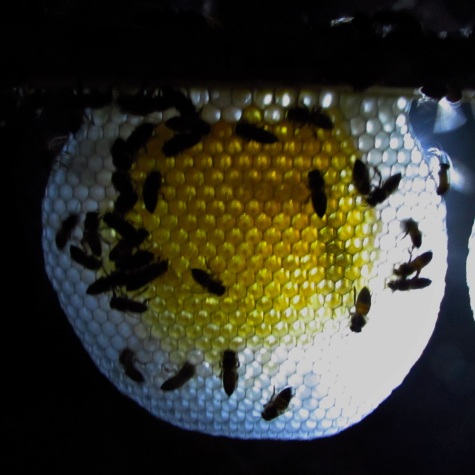 My host brother’s voice appeared behind my shoulder. “Are you OK?”

“Yeah, I’m OK,” I said boldly in my newfound confidence. “Are you?”

Ebrima hesitated, then finally stepped closer to see the honey comb. “Yeah. This, is cool.”

Adrenaline rushed through our veins, and we were hooked.

A PLEA AND A PROMISE

“Take me to America.” With four months in The Gambia under my belt, I was used to the plea. But this one was different. It came from my host brother, the man who presented me to the village elders, let me tag along to hang out with his friends, hammered nails into my concrete walls, cared for my puppy when I was away, repainted my house in over hundred degree heat just because I didn’t like the color, and the list goes on. 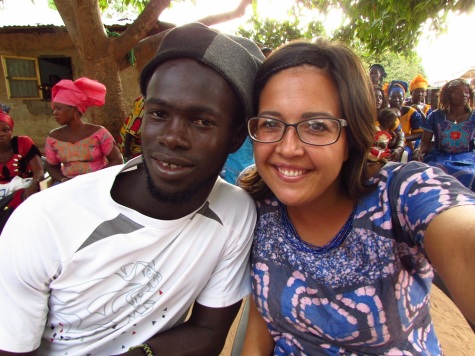 Ebrima, “Bailo,” and I at a naming ceremony in a neighboring village

“Take me to America,” he said, his words dripping with desperation. “There’s nothing for me here.”

With subpar marks in a failing education system, Ebrima, now 27, had dropped out of school in ninth grade to pursue what he thought was a brighter path. Electricity had finally hit the little nation. And he, would become an electrician.

Ebrima earned a certificate at a trade school and got to work. For a couple years, the work was endless. But then the villages chosen to receive light did and the few families who could afford it bought it, and then the project kind of puttered out with power only dotting the country that still mostly remains in the dark.

Aside from some contract electrical work and making charcoal here and there, Ebrima found himself like many young Gambian men in their twenties – lost in unemployment and looking for a way out.

“All my friends either got job or didn’t get job and went The Back Way,” he told me that evening under the mango tree. He said he’d thought about going but couldn’t bear to leave his family who openly disregarded the illegal migrant route through Libya to Europe as too dangerous. If he was going to go he’d have to steal his father’s livestock, sell it and leave quietly in the dead of night. That’s what everyone does, he said. But he, he just couldn’t.

“I’m shaming my family. I’m the eldest son. I am supposed to contribute and I’m just sitting,” he explained. “Take me with you when you’re done here. I’ll do anything. Just promise me you’ll help.”

The guy who had helped me in more ways than I could count was now asking me to help him. As much as it pained me this time, I told him I couldn’t take him to America. He did agree to give up his efforts to flee if I could help find him work here. So without a clue how I could keep it, I made a promise to try.

I was determined to help Ebrima find something to do in his own country where he could live with his family who depended on him. But with unemployment as ubiquitous as the rains in Africa, I didn’t know what I could possibly do to help a high school dropout.

Months passed and my promise loomed in the back of my mind like the plague. As I talked with other volunteers about their projects, I wondered if beekeeping could be a fit for a project of my own. A Peace Corps partnership with a local NGO offered free trainings and required no degree for what could be a promising profession. I asked Ebrima if he was interested. He was.

And so finally, six months after my promise, there we were – with the mesh face masks, the red rubber gloves, the black rubber boots and the bulky jumpsuits, on a farm, surrounded by thousands of bees. An education volunteer born and raised under the Las Vegas lights, I was both completely out of place – and exactly where I was supposed to be. 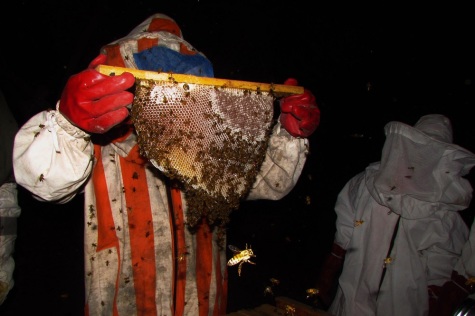 Back in our village, we hung our catcher boxes in the tops of trees and waited, hopeful but not overly optimistic. Our trainers suggested we hang as many boxes as we could. We had two. But within days, we could see the bees hovering.

Not expecting a catch so quick, we didn’t even have a full hive to transfer the bees to. The luck threw Ebrima into a fit of motivation I still have yet to see elsewhere in this country. Throughout the next month, we got to work. We attended another training to learn how to make a hive. We’d have to start from scratch; we didn’t even own a saw.

Ebrima took a leap of faith and spent his small savings to buy ingredients for the honey body cream we had also learned to make at the training. Beekeepers sometimes make it once they have honey as an added-value product, but we couldn’t get honey because we had no supplies and no money. It was Ebrima’s idea to do things backwards to generate some start-up funds. We decided to buy honey from other beekeepers; it would lower our profit margin, but we would have to deal with it.

We made four batches of the body cream in a single morning. The same afternoon, Ebrima went door to door and sold every last jar, earning more money than the average Gambian makes in a month.

The income bought us supplies for a hive and we spent the next week working until our hands blistered and our muscles ached. We chopped wood and hauled it to our small plot of land, made a fence and constructed two KTB boxes we’d use for hives. 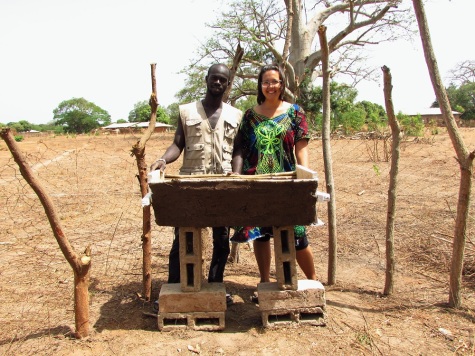 We suited up in borrowed gear and set out to make our first transfer, unsure what to expect. As we walked out to the bush, I tried to be realistic without completely extinguishing the excitement.

“There might only be a few bees,” I told him. “We’ll just see. Remember, they told us it takes patience. If there are only a few bees, we’ll keep trying.”

We used our rope pulley to lower our catch, but before the small box could reach our red rubber gloves we knew there were more than a few bees inside. It was early June, the off season, but the catcher box was swarming.

Giddy, we moved the colony into our first homemade hive. 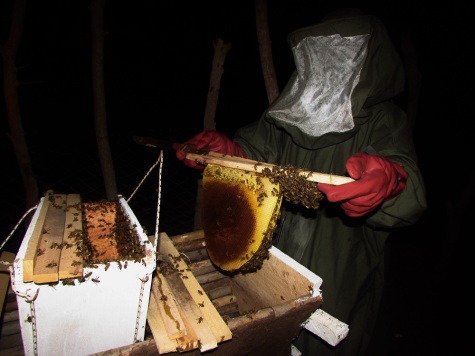 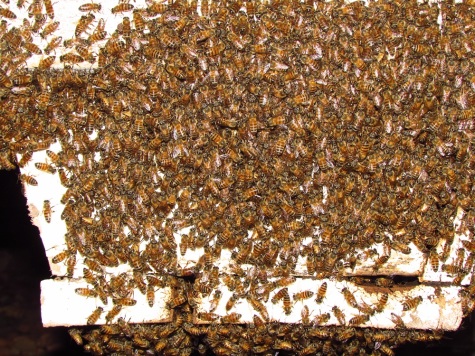 The next evening around sunset, we walked by without suits just to see if the bees had stayed. They had. Without even opening it, we could see their flight path from the hive to the nearby baobab tree. Ebrima dropped to the East right then and there, and prayed.

Ebrima’s commitment was infectious, and suddenly, everything in our world revolved around bees. 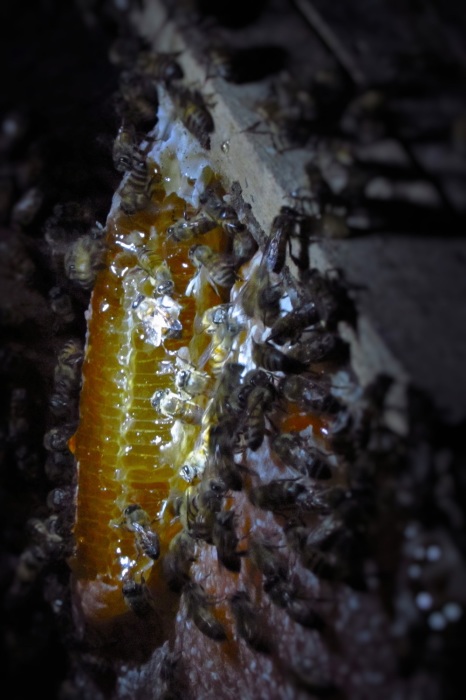 We continued to make the body cream to turn a profit and save for more supplies. We checked on our catcher boxes and colony from time to time, careful to follow the schedule and not intrude too much. We attended another training.

We even had unsolicited donations for our little project. My uncle in the States, a former beekeeper himself, sent us money for bee suits. A local NGO worker, who I randomly met heard about my project and gave me a hive.

We quickly caught another swarm and like that, we were budding beekeepers. We now had seven catcher boxes lying in wait and four KTB boxes, two of which housed colonies. With a lot of hard work and a little luck, we had stopped discussing The Back Way and started a business.

This is Part One of a two-part series on beekeeping. To read Part Two, A Lesson in Resilience, click here.

← What’s Next
Sleepin’ under the stars →