I bought live chickens to cook for dinner. It was the best and worst idea I’ve ever had. Let me explain.

My best friend, Nora, is visiting me here in The Gambia. So, I thought it would be funny to tell her we would buy chicken for my family and then surprise her by going to the market and picking out live ones. This part was indeed hilarious.

We showed up to a bustling market in a town I consider to be the Worst Place On Earth because it’s filthy and the people are aggressive. Nora had just arrived in-country two days previously, so it was all pretty overwhelming. We also had a bunch of bags because we hadn’t yet dropped by my house. So here we are in the Worst Place On Earth carrying a ton of stuff — including two live chickens — from the market, through the town, to a dirt lot full of cargo vans used for public transport, and into the back of a vehicle. Luckily, a local friend helped us in this process so it really wasn’t too much of a hassle. Plus, we were so amused that we were buying live chickens, nothing else mattered. We repeatedly looked at each other, said “This might be the best idea we ever had,” and laughed hysterically. 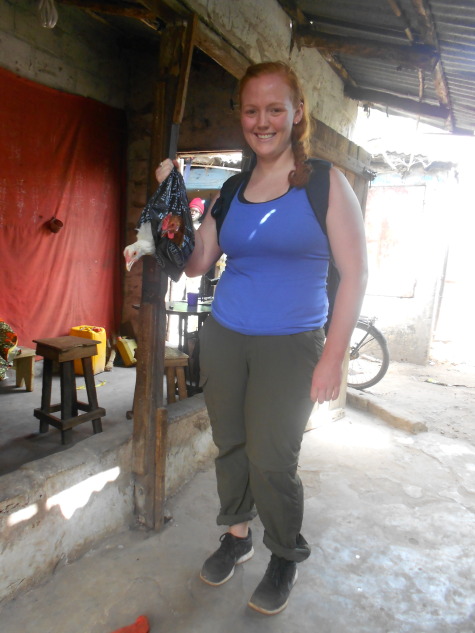 Nora carrying our chickens through the market

Then, the bird which we had named “Blancita” started pooping everywhere.

Blancita continued to poop all over the back of the van while pecking at my ankles for the hour-long journey. We pretended that the chickens weren’t ours as she squaked but it was obvious and everyone laughed at us because we were unable to play it cool. Eventually, we arrived in my village and made it out of the car without forgetting anything. Barely.

After taking numerous photos with the chickens – much to the amusement of the neighborhood boys –my brother put them away since we would not cook them for a few more days. 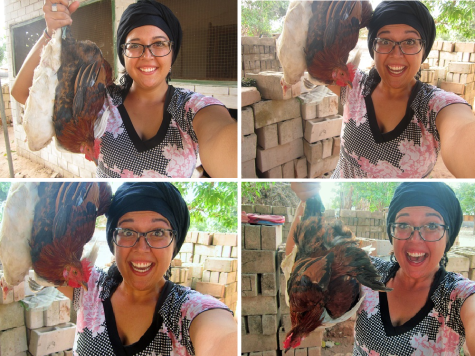 I was too excited to buy live chickens.

My brother would kill the fowls, my sisters would teach us to prepare the birds and we would cook chicken burrito bowls for the family – making this meal the best cultural exchange event we could dream of. Or, the worst.

Blancita, of course, raised a ruckus. Ebrima sliced her head clean off and held her down until she stopped moving. But as he let go and stepped back, she jumped up at least a few feet then sputtered around the compound in a horrifying manner. I was so shocked, I could barely take a picture. 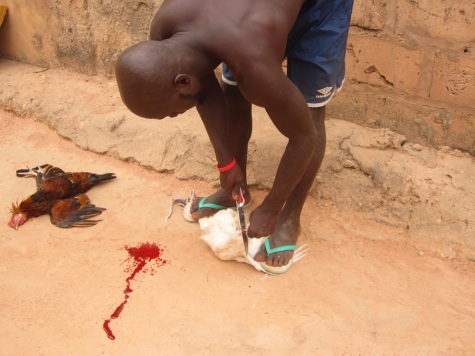 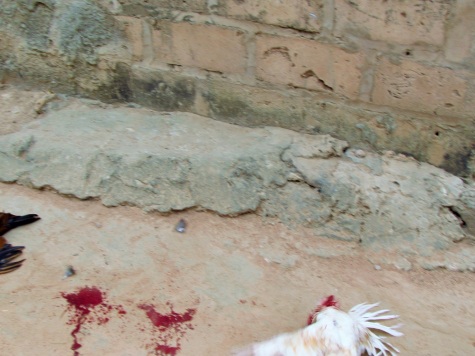 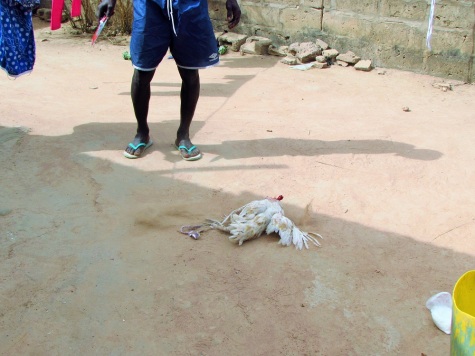 And here she is now on the other side of the compound.

Since I’m now a seasoned witness to slaughters, I wasn’t too bothered by the mishap. However, I clearly did not think through the next part when I thought it would be fun to buy live chickens.

A few months ago, I wouldn’t even eat chicken off the bone. And now here I was, de-feathering them. Mhmm. 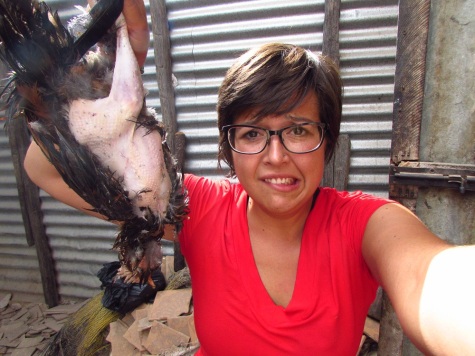 My eighth-grade sister, Jainaba, and my fifth-grade neighbor, Isatou, taught us the steps like pros. We boiled water then poured a bit on the birds to make the plucking process a bit easier. It wasn’t difficult to pull out the feathers, but it surely wasn’t pleasant. The wet feathers stuck all over our hands while we plucked them from the lifeless, headless chickens. 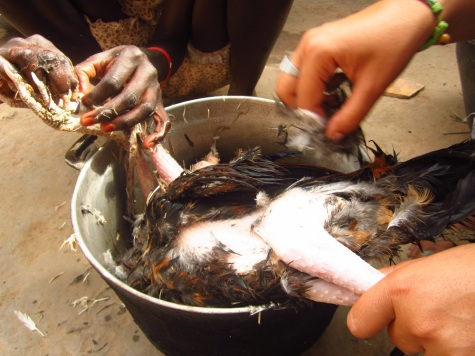 Nora handled all of this like a champ. It was difficult to believe she’d only been in an African village for less than a week. While I helped without a peep, this was the moment when I seriously reconsidered why I thought buying LIVE chickens was a good idea. But, at the same time, I certainly developed new-found appreciations on many levels.

We washed the chickens with soap then the girls began the butchering since they know I cannot be trusted with a knife. (My four-year-old sister can peel an orange better than me. Anyway…) 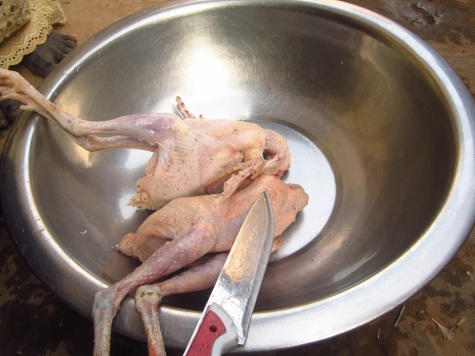 The most important part of getting out the guts is finding the gall bladder. The little green stone looks harmless, but if not carefully removed, it can spoil the whole animal, making it bitter. 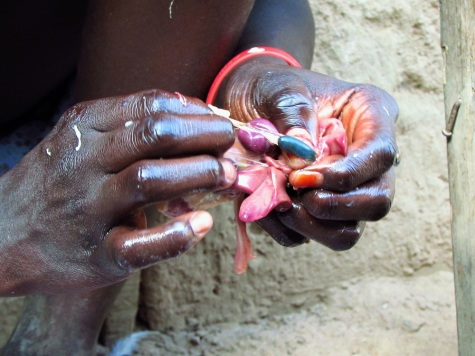 When all the chopping was finally finished, Nora and I boiled all the meat in taco seasoning. Once it cooled, we picked it apart, shredding the meat we’d use for the burrito bowl and setting the rest of the parts aside for snacking.

The girls enjoyed watching us do our part, which was cooking the sauce: onions, tomatoes, beans, kidney beans and corn. 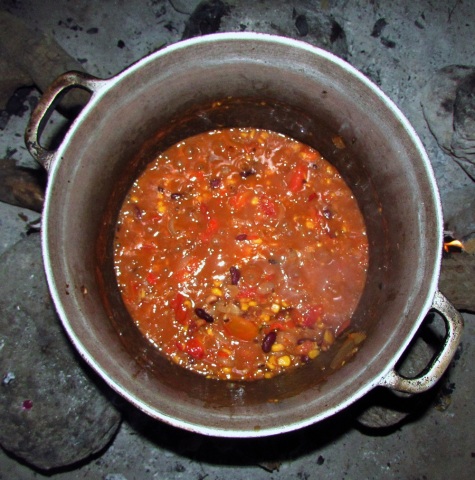 We shared our cultural cooking masterpiece, Gambian style, in family-size food bowls – and not a crumb was left over. 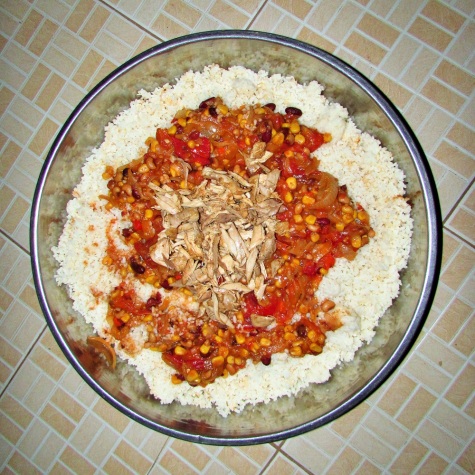