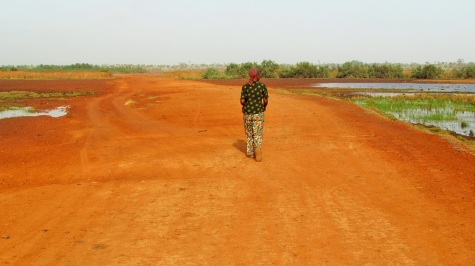 Although Peace Corps is centered on building relationships, I have sometimes felt like it’s all a farce. I have plenty of friends here but they are my “Gambian” friends, a relationship that must be qualified because Gambians don’t know the real me … They only know the me in Gambia. I’m not Jessica Fryman. I’m Fatoumata Camara. Most Gambians wouldn’t dare accept the liberal, outspoken woman that I am in America so I play a different persona they can more easily befriend.

I suppose it can be that way in the United States too, though. We have our “work” friends, our “church” friends, our “college” friends — each group perhaps knowing us a little differently than the next. It’s not that I’m trying to suggest I’m fake or two-faced, it’s just to say that we all naturally fulfill roles and play different versions of ourselves depending on the script.

I think it is rare to find a friend who transcends that – someone who is just your “friend” – no qualifiers needed.

After some months here, I didn’t expect I’d ever find that in one of my Gambian friends. I thought our cultures are just too different, our views too varied, the divide in our lives too great.

But then there is Habbie.

Habbie, now 23, was forced to marry a much older man she did not even know before she finished high school. Six months after the marriage, she escaped the abuse but later delivered a baby boy. Determined to write a different story for herself, she enrolled in a training program to become a nurse. After making amends with her parents and helping her family convert to Christianity, she moved to another village to accept a nursing job. She works full-time and raises her son and two younger siblings by herself.

Within the first week we met, Habbie shared this story with me saying, “I can tell we are going to be friends, so let’s just tell it all now.” Since then, I’ve helped her share her story with young girls in the community so she can also inspire others.

We’ve always talked with an honesty that I’ve yet to find elsewhere in this country. I never have to worry about offending her or revealing too much of my personal opinions when we discuss sensitive cultural topics. And because of that, I’ve also been able to let her in, to allow her to know a little more of myself too.

We’ve had picnics at the riverside, watched American films and African films, cooked American food and African food, played cards and sat around chatting ‘til there’s just nothing left to say. Between our hectic work schedules, we always manage to find some free time to spend together, even though it is often interrupted by her kids or my siblings who inevitably want to tag along.

Both new to this village, we are easily each other’s best friend. Still, the barrier of our differences seemed to exist.

Recently, Habbie invited me to go with her to visit her home village, a predominately Fula community that sits on the north bank of the Central River Region. Off the main highway, horse carts navigate a dirt road full of deep ravines and pot holes for 9 kilometers to a village far poorer than the one where we live now. 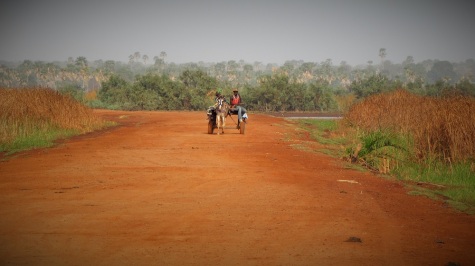 Within an hour of my arrival, her neighbor delivered a baby girl that would be named after me 8 days later according to tradition that dictates the name be in honor of the visiting “stranger.”

As we waited for the newborn to come home from the clinic, we sat outside chatting and snacking with Habbie’s family in their compound of thatch-roofed mud huts. 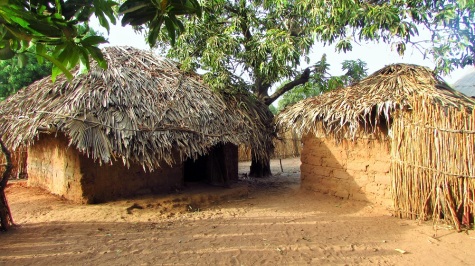 When we’d eaten all the ripe mangos from the tree, we started picking ones that weren’t quite ready. We pounded them to mush with salt, a bullion cube and hot pepper – a spicy, tangy concoction we ate with our hands.

“She’s not like other toubabs,” Habbie laughed. “And besides, if she does get sick, the toilet isn’t far. We can still chat over there.”

To Habbie, I wasn’t a special guest; I was a regular old friend. And ironically, that is the very thing that made me feel special.

Later, we went over to meet the new baby. Then we walked around the rest of the village, so Habbie could introduce me to people. 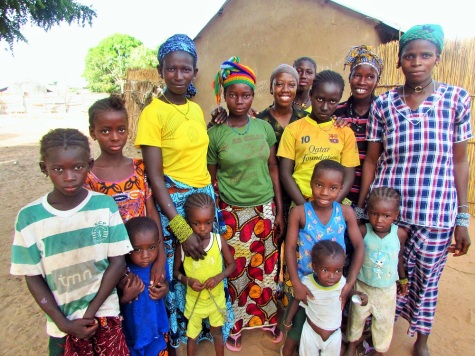 People in the village who begged me to take their photo. Habbie, always smiling, is center. 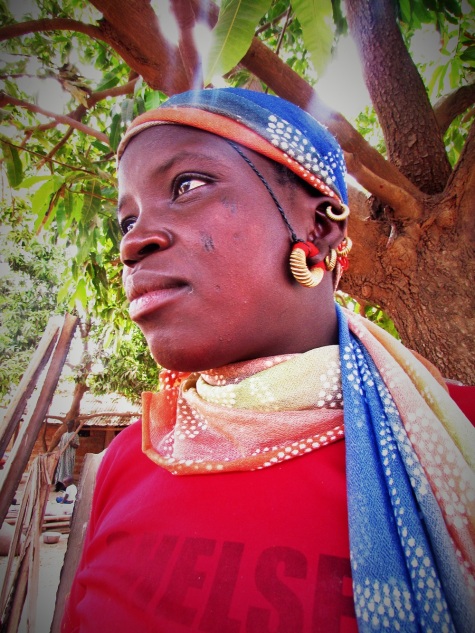 Ruby, a friend of Habbie’s, I met while visiting the village.

She even insisted on stopping at the compound of her ex-husband’s family so we could also greet them.

“I don’t know how you do it; how you are so easily able to forgive,“ I said.

“It isn’t easy,“ she replied, then left it there.

That evening, when Habbie’s father asked me to pray, she quickly sensed me hesitate and she started to lead the prayer instead. It felt like a silent nod to the fact she knew I wasn’t really a devout Christian – that she knew it was just a line I had to say to be accepted here. Despite the fact that she is an ultra-religious believer herself, it felt like her way of saying: I know you’re not, and it’s okay.

Under a blanket of stars, we stayed up late confessing secrets about the men we have crushes on. We swapped advice and whispered until we fell asleep midsentence on our mattress, old rice bags stuffed with hay. I felt like a 12-year-old girl at a sleepover without a worry in the world.

In the morning we ran to the river and she showed me the spot she learned to swim. We laughed about nothing and enjoyed the quiet solitude away from the busting village where women were starting their daily chores of bathing babies and pounding coos. 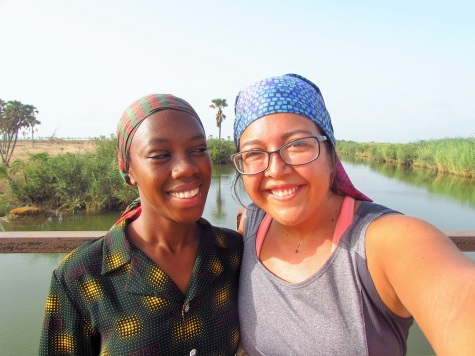 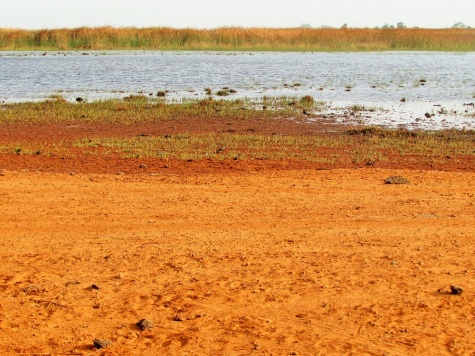 Somewhere along the way, the labels of our friendship melted away. We became friends without the need to qualify it with “Gambian-toubab-Peace Corps-whatever.” Friends. 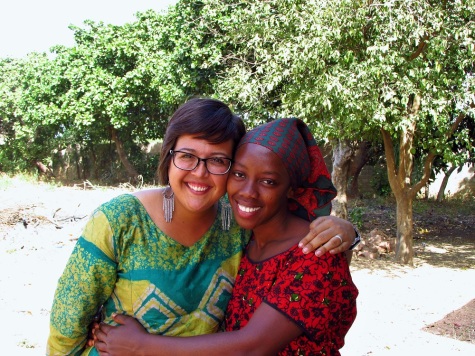 I think for her, it is finding someone who relates to her progressive dreams of wanting a career before a husband, someone who understands ideas many Gambians aren’t yet ready for. It’s finding an outlet to share her story, something that’s become a therapeutic source of closure.

← The Village ‘Grocery Store’
A Letter from Leo →