The best part about this experience so far is that I already feel at home with my Peace Corps family. 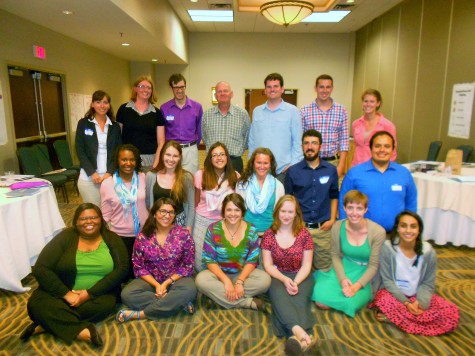 I met the group of education volunteers in Philadelphia where we had a brief orientation called “Staging” for the day. We got to know each other a bit and learned the basics of the Peace Corps safety and security policies. We also shared our aspirations and anxieties, and it was comforting to know that everyone shared the same fears about service. It’s hard not to become friends when you talk about poop within ten minutes of meeting someone!

After Staging, we had two full days of travel. In the morning, we bused it to New York City while the East Coasters laughed at our oohs and ahhhs of seeing the Statue of Liberty for the first time. We weren’t able to be tourists, though, and went to the airport, so we would have plenty of time to check in two years worth of luggage for 19 people.

When we arrived, the airline check-in desk wasn’t open yet, so we plopped down on the ground and began the eternal wait. We played some cards, ate lunch and took naps. Two hours later, we got to see everyone’s true colors as we took the “weight-limit” test. I had expected to pass the test with flying colors as I had of course weighed my luggage at home about a thousand times. My two checked bags weighed in at 35 pounds and 50.0 pounds. Then the teller asked if I had a carry-on! Since when does the weight matter for a carry-on?! I had (smartly–or so I thought) packed all my books and heavier items in the carry-on. It weighed in at 46 pounds. Despite my pleas, the clerk charged me a whopping $200.

Other volunteers had the chance to frantically shift their stuff to other bags in order to meet the weight limit, but three others also had to pay. Watching how everyone responded to the situation and how everyone jumped into help each other was a good moment to see the unity of our group. 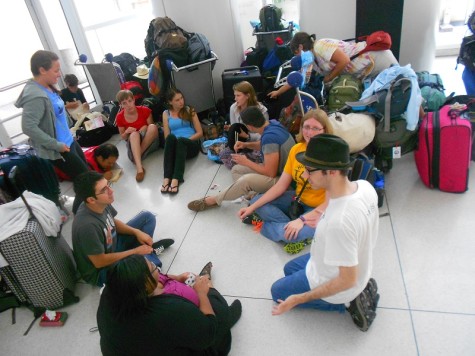 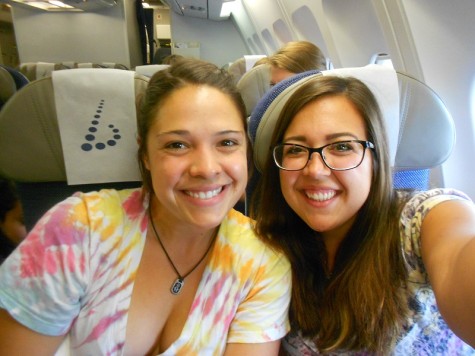 Michelle and I on the first leg of the journey. 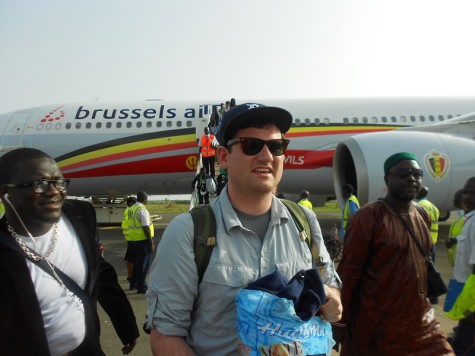 Bill as we land in The Gambia.

After the flight to Brussels, more waiting and the final flight to Gambia, we arrived after nearly 36 hours of traveling. As we arrived, my nerves were replaced with pure excitement. I was the first to cross through immigration, and as I did, the education program manager, Linda, gave me a hug and greeted me by name. Behind her, host country nationals from Peace Corps Staff also greeted us.

After we claimed our baggage, Peace Corps volunteers were waiting with “Welcome Home” banners and even more smiles. It was so special to know that the staff was also excited for our arrival.

The staff then helped us with our luggage, and took us to the Peace Corps van where they had waters and fans waiting for us. We then drove the short trip to the Peace Corps transit house were we are staying for five days as we meet more staff members and learn more policies. As soon as we threw our bags in the bedrooms, we walked the five minutes to the beach and jumped in the Atlantic Ocean! 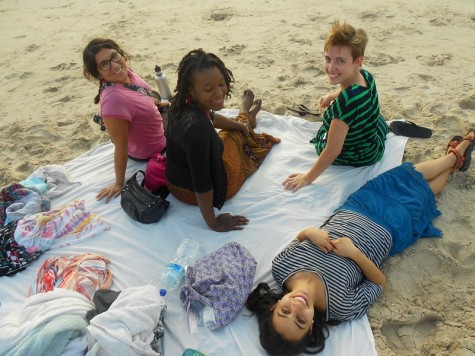 I breathed a sigh of relief, and thought:”These next two years are going to be fine; in fact, better than just fine!”

We are being pampered here in the city, and we haven’t seen hardly anything of the country yet, but we are soaking up the last bits of the modern life because it’s all about to get “real.” We move to our rural training villages in two days, but I feel so at home in this Peace Corps family and can’t wait for all that’s to come in the next nine weeks of training: meeting my training host family, preparing for service, wearing local dresses, taking bucket baths and even pooping in a hole!