Counting down to a spectacular 2014

Being born and raised in Las Vegas, I have grown up literally fearing New Year’s Eve. For me, the holiday is usually observed on a television screen safely within the confines of my home while the stupid, stupid tourists cram onto a single street in order to drink themselves into a very, very black oblivion. On NYE, you honestly could not pay me to brave Las Vegas Boulevard,  also known as the place where people are punched and trampled in a chaotic sea of bobbing drunks. Occasionally people even drunkenly climb light poles (trying to escape the madness?) where they unfortunately experience a whole new type of firework that involves death by electrocution.

This year, safely on the other side of the Equator and with so much to celebrate, I thought I’d try out Chile’s NYE hot spot which is reknown for a spectacular firework show that lines the Pacific Coast. A few hours before midnight, my friend Nora and I scrambled to the top of one of the famous hills in port city Valparaíso for a perfect view of the bay. 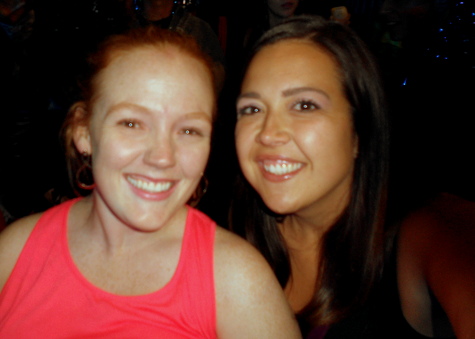 Diez-Nueve-Ocho-Siete-Seis-Cinco-Cuatro-Tres-Dos-Uno! …. and then … ten minutes later … (this is Chile), across six or so coastal towns, the shimmering sea relfected a dazzling light show as proud nationals chanted: “Chi-Chi-Ch, le-le-le, Viva Chile!” in what was the best firework display I’ve ever seen. 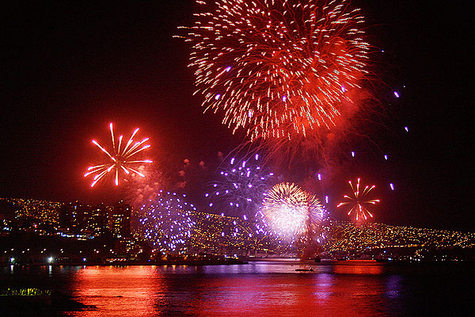 After the 20-minute show, the party moved from the hills down to the city’s plazas which were akin to the nightmare that I imagine the Las Vegas Strip to be on NYE. Live music blared and we danced, dodging the already passed-out drunks and sleeping babies (what?!) on the ground while trying (unsuccessfully) to avoid the still-standing but stumbling drunks who were crashing into anything and anyone in their paths. We managed to survive about an hour and a half of the mess before escaping to the side streets.

“Be careful, it’s slippery here,” Nora said as we made our way out of the crowd.

I looked up to spot a line of a dozen men peeing on the sides of buildings along the entire block. “It’s piss!” I yelled back as we tried to jump over the rivers of urine.

Although an overly packed plaza of uncontrolable drunks isn’t my scene, it made a perfect place for my favorite pasttimes of storytelling and people watching. Plus, the fireworks show along the Chilean coast is simply unmatched and it was a spectacular way to ring in what should be an incredible year for me. Feliz 2014!

I’ll of course document everything here on my blog, so stay tuned for all that’s up next:

3. Reconnect with my step-siblings after eight years

4. Meet my cousins who were born while I’ve been living abroad

5. Visit other family and friends who I haven’t seen in ages

(Did I mention all that is just in the first six months of the year?)

I’m anxious to start all that awaits in these crazy next adventures, and I hope you follow my story along the way. Most importantly, may you also have a blessed and happy 2014.