Think about the last time you cooked Thanksgiving Dinner for 20 people. Now imagine doing all of that without modern appliances, over a fire in an outdoor shed with poor ventilation, in the middle of summer. That is basically what cooking the Tobaski feast is like in The Gambia. And for reasons I can’t understand, my oldest sister did it all wearing a cotton turtleneck.

As soon as the men butchered up the sacrificed rams, my mom and sisters started roasting some pieces over the fire. They doused the meat in salt and served it up as a little appetizer while they started to prepare the main course, my favorite Gambian dish, benechin. 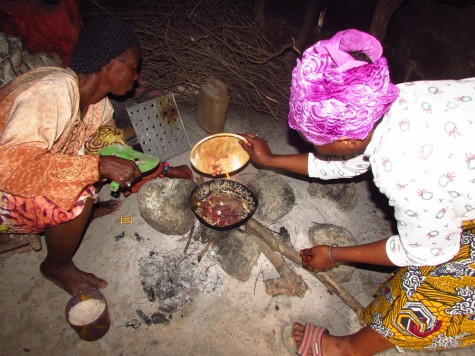 Benechin is fried rice with vegetables and either fish, chicken or meat. It is often also served with a tasty leafy-green okra sorrel. For the Tobaski Edition, we of course had plenty of meat at the center of the food bowl.

First, we pounded colorful spicy peppers and kernels of black pepper into a grainy paste. We added cloves of garlic and onions and continued to pound until everything was smashed together and thoroughly mixed, which is no easy task. 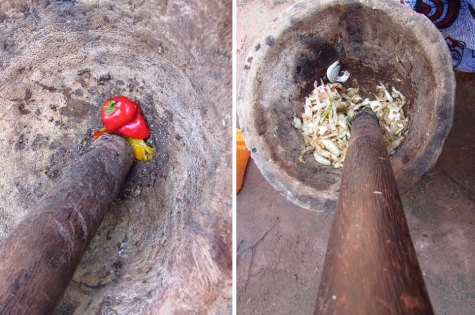 The vegetables – eggplant, cassava and bitter tomato – were washed, peeled and cut, then boiled in water. My sister boiled the meat in a pot of oil. 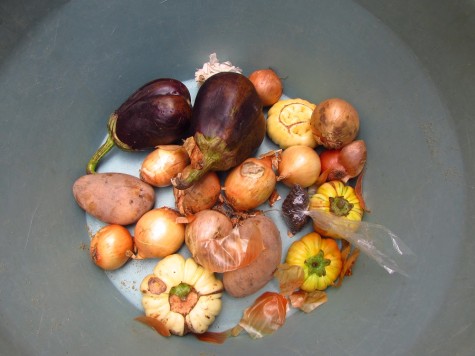 To make the sorrel, we had to take all the stems off the leaves that my sisters had collected from a specific tree in the bush the day before. The leaves were washed then boiled with oil and okra, making a stringy but tasty topping.

After about three hours, the benechin was finally finished and served in a family-style food bowl with the vegetables, meat and sorrel at the center of the fried rice. 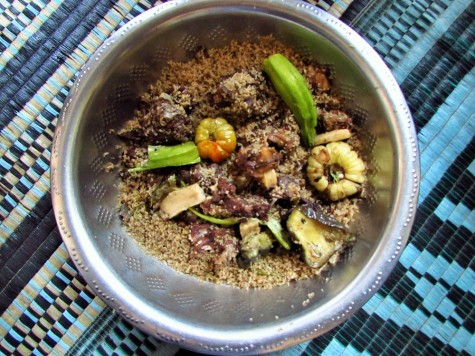 As soon as the bowl was empty, my oldest sister headed back to the kitchen to begin preparing the next meal. She did this around the clock – making domoda, meat stew on top of coos and other concoctions – for three days until the meat was finished.

← A Simba who doesn’t sing Hakuna Matata
What is Tobaski? →