From the Kitchen: American Soup

Every time I cook with my sisters, they ask: “Do you eat this in America?” Time after time, I stare into the pot: fish heads bobbing in a red sauce, green curd-like paste made from leaves off our tree, spaghetti with mayonnaise, rice with palm oil. “No,” I shake my head.

One day, my sister Sainabou finally exclaimed, somewhat perplexed: “Well, what do you eat in America?” I promised to show them one day.

It took me awhile to think of a dish I could create with only ingredients found in The Gambia, cook with no oven and afford to make for a family of 15 (give or take a few).

I decided to triple the recipe and pray it made enough.

My sisters curiously led me through the market as I crossed off my grocery list: 18 potatoes, 3 carrots, an onion, a handful of bullion cubes, a cup of flour, a liter of milk and a plastic bag full of butter.

They were even more thrilled to watch how I put it all together. But perhaps, the most exciting moment for them was watching me effortlessly take the skin off potatoes with the “fancy” vegetable peeler I’d brought from home. They usually peel potatoes with a dull knife and wanted me to teach them how to use my gadget.

I dissolved the bullion cubes in water over a charcoal furnace before boiling the potato chunks and onion. We added the grated carrots, milk and butter then stirred in the flour. 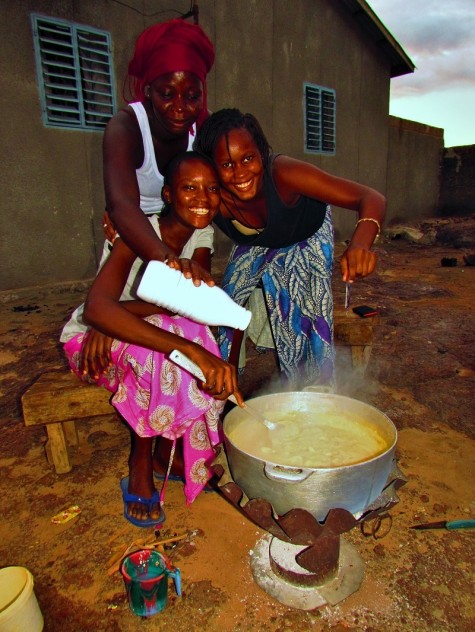 “Can  I try?”
“No, me!” they shouted over each other when I declared the soup finished.

“Let’s put some in a bowl just for us before we serve the family,” Binta laughted.

We served the thick soup on two platters (one for men, the other for the women), but not before Binta stole a secret serving to save for later.

“I was serious,” she sneered, sneaking spoonfuls into her personal bowl. “I like American deeenah!” 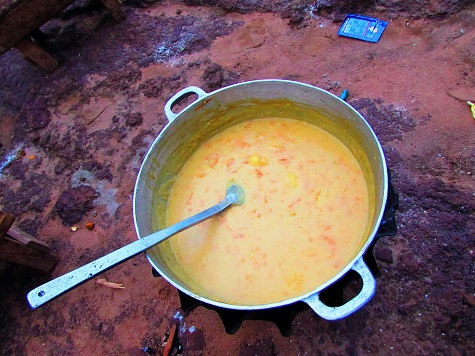 The men devoured their platter then proudly held it up to me. “It’s finished,” my father said. “When will you cook again?”

“I like American soup,” the boys said, as they started to lick the empty pot.

My meal was a big hit and the family thought it was the coolest thing that they got to eat “American soup” in The Gambia. Relatives who were out of town called and texted me to talk about the dinner, sending their regrets they’d missed it because this person or that person had said it was so good.

News travels fast when you have a big family spread out across such a tiny nation.

My sister Sainabou declared: “Now the whole country knows about your good cooking!”