As I reached the top of the subway steps, the evening air stung my eyes. Tear gas. Like a mist of mildew, it still lingered in the air from the day’s student protests. I quickly surveyed the area, checking to see whether police and students were still battling in the streets or if it was clear to walk home along Santiago’s principal avenue. The radius surrounding Santa Lucia metro was desolate, scraps of paper clogged the gutters of the car-less street. I exited the subway and started on my route home, which was eerily quiet along what’s usually a hectic honking mess of rush-hour traffic.

In the distance I spotted an ongoing stand-off that seemed to be dwindling down peacefully. But in an instant, the scene changed.

Police tanks spraying tear gas barreled down the street; the water cannons followed quickly in tow. I ran for cover, ducking into a McDonald’s just as employees pulled the metal doors shut. All 50 of us sighed in synchronized relief as we crowded in the small corner store. We’d narrowly escaped the cannon, nicknamed “guanaco,” Chilean Spanish for an angry Andean llama that spits when annoyed.

But our deep breaths brought an unexpected whiff of dense gas, setting off a never-ending symphony off cacophonous coughs. The crowd of innocent bystanders became mob-like  as we begged for the metal gates trapping us to open. Finally freed, we dispersed in all directions, running to find fresh air. I followed some locals to a market where the clerk waited with already-halved lemons. Desperately, I squeezed the juice down my raw, raspy throat, trying to soothe the stinging pain. Swallowing the divine liquid wasn’t easy, though, as the harsh coughs hacked on and on. 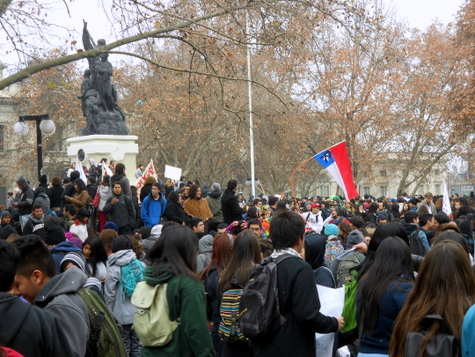 A June protest before it turned violent near Los Heroes metro.

The June scene, a once common occurrence in Santiago, is long-gone now as students buckle down to finish a school year extended so they could meet graduation requirements despite months of protests and sit-ins. At my school, however, the strikes have just begun.

The Chilean education system, while better than its Latin American counterparts, is marred by inequalities and profitization. The system is a mangled web of  private, subvencionado and municipal schools that provide the only real opportunities to the rich.

For students unable to afford private schools, they can receive government funding to attend a subvencionado, a school that’s run by the private sector but relies on public funding. However, these institutions are overrun with profitization where schools lack sufficient printers and books while its owners have chefs and chauffeurs. But the alternatives are worse at state schools where low-income areas lack not only supplies, but qualified teachers, decent English programs and other extra-curricular activities leaving students ill-prepared to advance to higher education. There, more issues abound due to little public financial backing which results in pricey tuition rates only the rich can afford as there’s no comprehensive system for student grants or subsidized loans. 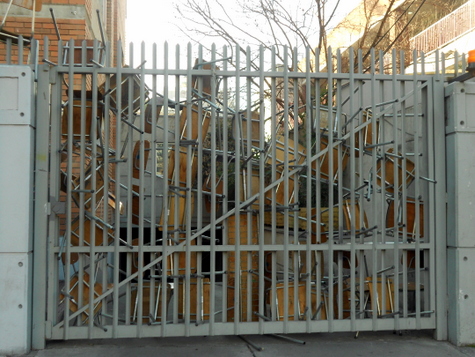 Students stack the chairs in the gate to show they are in “toma” or have taken over the school in protest. 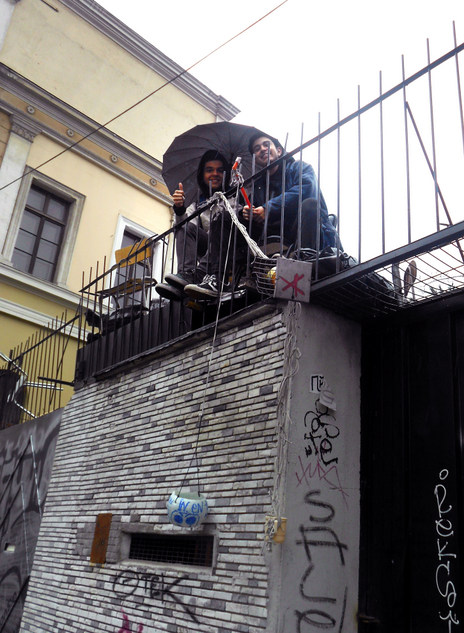 Students at Instituto Nacional, considered to be Chile’s most prestigious high school, “fish” for donations to fund their strike last winter. Students raise money for supplies and food as they camp out in their schools during monthslong sit-ins.

At the K-12 subvencionado school where I teach,  education is a business. It fundamentally functions on vouchers low-income students receive from the government to pay for their tuition. The owners seem to reap the profits as the schools’ resources are slim.

I think our school is special though; we make the most of what we have. Student artwork decorates the walls to cover the peeling paint. Students share books and computers, and have a self-monitored system for taking turns with the limited ping-pong tables at recess. Instead of soccer balls, they use bottle caps. Teachers bring their own supplies for special projects. The English program recruits native speakers and dedicated volunteers. 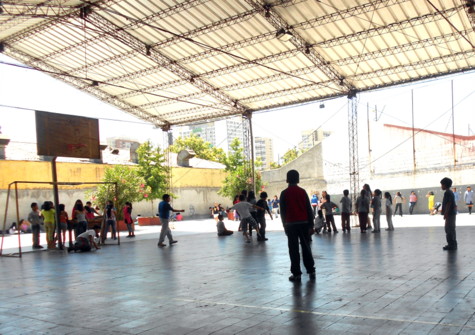 The elementary students playing soccer in an area that’s used for eating lunch, recess, the stage, physical education and various other activities.

But because the school isn’t profitable, this will be the last year of English spelling bees and singing shows, of theater productions and extra tutors.

The school has been sold.

When the owners announced the deal a few months ago, it spurred dozens of rumors regarding the students’ futures. Initially, the elementary students thought they would be the ones forced out.  They cried, asking whether I’d be attending their new school or if they’d even have English classes. They begged for answers as to why the owners were selling them, as to why the owners no longer cared about them. It broke my heart. And I had no answers.

In the end, the school will be elementary-only, leaving the highschoolers with no place to go. They chanted “No, no, we won’t go!” as their teachers and administrators met in secret to discuss the details. Others started quiet strikes and the last few weeks of school devolved to near-empty classrooms while students searched for new schools and attended tours and interviews.

The high school courtyard on a day students were released early because teachers and staff had to attend more meetings regarding the sale.

I felt proud that my students stood up for themselves without violent protests or often ineffective sit-ins or “tomas” that the rest of the Chilean student population turns to.

But the sad reality is my students’ voices will also go unheard. The school will still be sold. They still have nowhere to go. 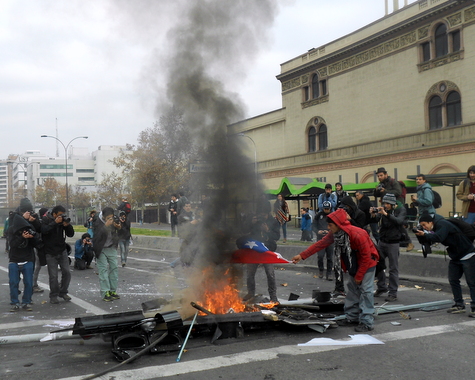 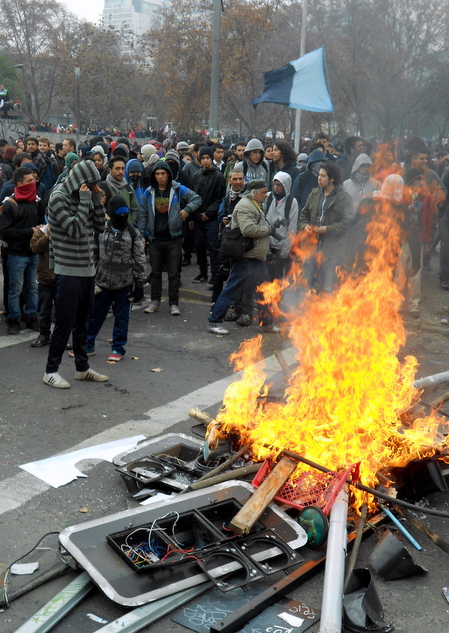 Student protests attract “encapuchados” or hooded vandals who are destructive, destroying bus stops and starting fires, forcing police to close in, which results in an eventual stand-off before water cannons and tear gas disperse the crowd.

Unfortunately, the other schools in the low-income neighborhood are run by the state, and are much, much worse than ours having no toilet paper in the bathrooms. Instead, students there fight and do drugs in the stalls, my students have told me. I imagine there are no native English speakers or special after-school workshops.

Many of my students still haven’t decided what they will do.  The lucky ones hope to be accepted at another for-profit subvencionado far from their homes but with all the same problems. Others will be forced into the even less desirable public system. Some of the Peruvian students said their families are considering returning to their country.

Initially, it was a large annoyance to dodge debris that students launch into fires and then choke on tear gas and run from water cannons in the aftermath. But as my fearful highschoolers talked with me about what would become of their futures if they can’t attend a decent high school, I began to truly appreciate the Chilean student movement’s efforts.

After numerous failed negotiation attempts with the government, I truly think they feel as if there’s nowhere else to turn as everyone’s stopped listening. At odds with a broken system, they feel as if their own country has turned its back on them. And it has.