I spent 10 days in February traveling through Chile’s Lakes District with my lovely friend Nora. We planned on seeing six cities, but cut it to four after we felt rushed and as though we were spending more time on buses than actually getting to know a place.

Experiencing some of the most beautiful places I’ve ever seen and tasting a bit of culture, it was a successful first adventure in Chile. I’ll post plenty of pictures and a bit about each place throughout the next week or so, in hopes of sharing a glimpse of this wonderful country. Enjoy!

A snapshot of Valdivia, Chile: Pouring rain drenches the town and a thick grey blanket hides the sun, but Valdivia is anything but gloomy. Nestled on the banks of a T-shaped system of three rivers, Valdivia’s charm and beauty shine through a long storm. Sea lions waddle up the river banks onto sidewalks, bellowing when a camera-happy tourist trespasses their territory. Along Río Valdivia, vendors skin fish, slice off the heads and toss the scraps to the barking sea lions who beg below. Patrons pack the market, Mercado Fluvial, trying to seek shelter from the rain somewhere between the fish stands and produce crates. An orange tarp flaps in the wind above, but blocks most of the elements nonetheless. Once escaping the stench of fish, it’s all campfire smells wafting in the damp breeze as locals burn logs in old-fashioned stove fireplaces to stay warm. 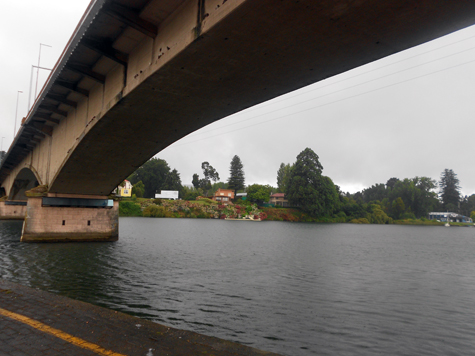 Río Valdivia, the main of three rivers in Valdivia 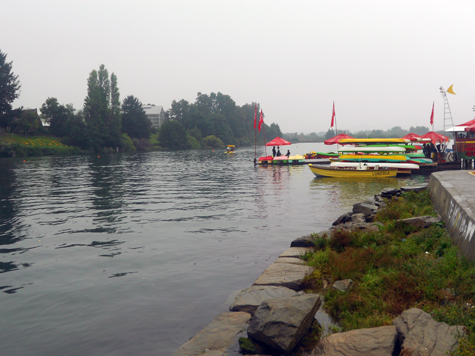 Take One — brilliant conversations of Nora and Jessica

Me: “Do you think the sea lions will come out in the rain? What if they don’t like the weather?”
Nora: “Well they live in the water, so I think they might like it.”
Me: “Oh yeah, they’ll like it.” 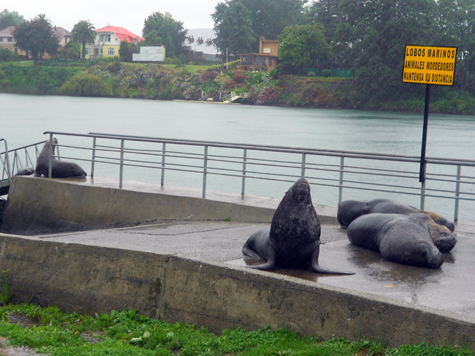 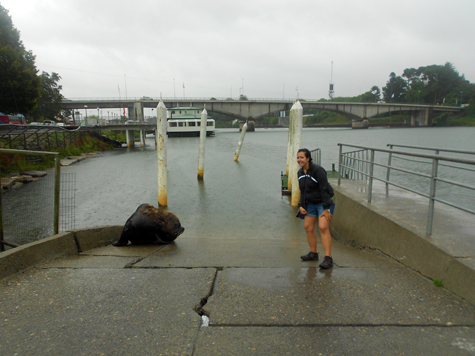 We were having an intense conversation in this picture. He liked me, but when other tourists got too close the following day, he let out quite the roar. 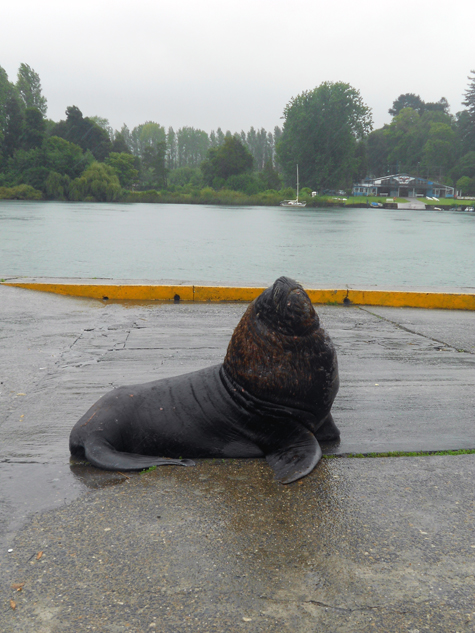 See what I mean … this guy is a beast! 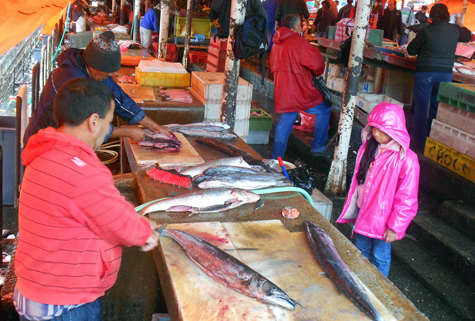 Love the look on this little girl’s face at Mercado Fluvial. 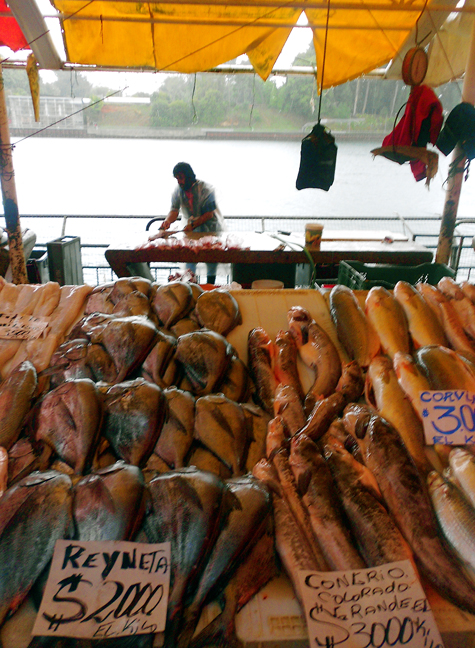 Mercado Fluvial on the bank of Río Valdivia. I tried both the reyneta and congrio (from restaurants at various points in the trip). The congrio eel was quite tasty.

One of my favorite parts of traveling is seeing how people actually live. I think the houses say a lot about a culture, which was especially evident in some of the other cities we stopped at on our trip. Here in Valdivia, most of the homes were small and modest. While each had an old steel chimney, painted wood panels and a well-manicured garden, no two were alike. The people fit the bill, and were as sweet and welcoming as one might expect by a look at their charming homes. 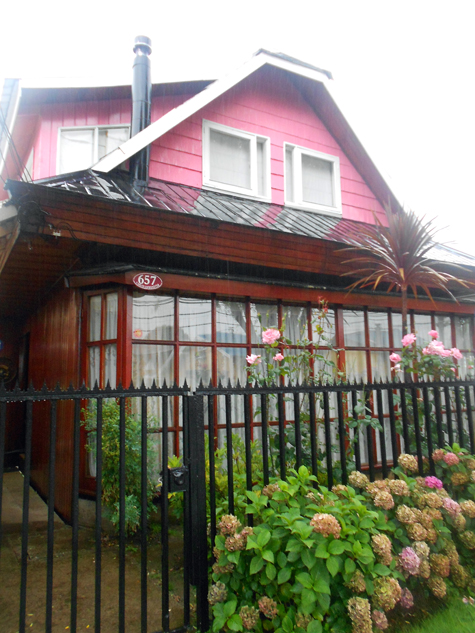 Out and about on a morning stroll through the neighborhood, the town was sleepy and still. The light drizzle seemed to somehow brighten the peaceful day. When an afternoon storm brought hours of torrential downpour, the town woke up from its morning fog and people milled about their usual business despite the weather. We made do traveling and sightseeing in the rain,  and took a city bus tour to seek some shelter with a visit to the Kunstmann Beer Factory. That wasn’t quite enough, though, and at about Hour Six we had had enough of being wet and cold! As we realized we might have to put up with rainy weather for most of our 10-day trek through the Lakes District, we made a new mantra: “Rain or shine, it’s gonna be fine.” And .. it was. 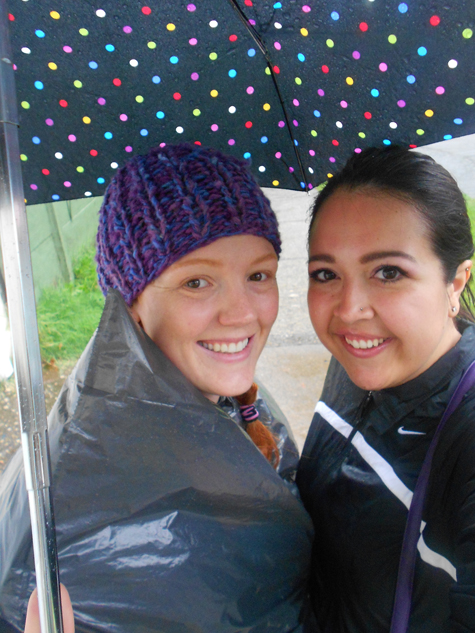 Singin’ in the rain during the peaceful morning drizzle. 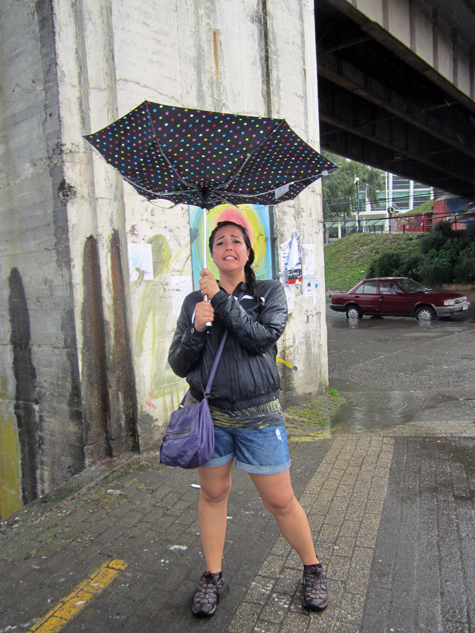 Whinin’ in the rain during the not-so peaceful afternoon storm.

A few months ago, I stumbled across a community art blog featuring old vans and micro buses, some of which are also parked against beautiful backdrops. When I arrived in Chile, I couldn’t help but notice that there are a TON of old vans rumbling down the streets, so I decided to keep my camera ready in hopes of representing this beautiful country on the Van Life website. Here’s one of my favorite van shots that I took on the trip. Stay tuned to see if it gets published! 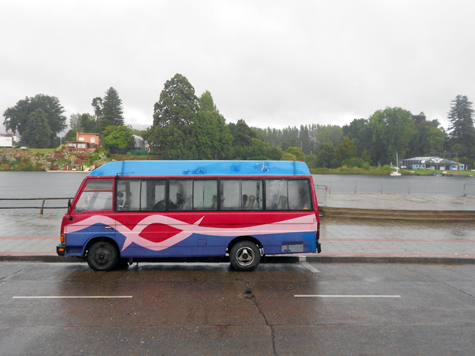