Download a PDF of the story as it appeared in print
in the Las Vegas Review-Journal.

Little old ladies love Las Vegas fireman Chris Stiles, who has been known to bring in their mail or put away groceries after helping them up from a fall.

But next year, it’s safe to say the 26-year-old will have a new flock of women calling themselves his fans — and not just for his good deeds.

The Las Vegas native stripped down to his bunker pants, showing off his perfectly sculpted abs for the first-ever national fireman’s calendar. 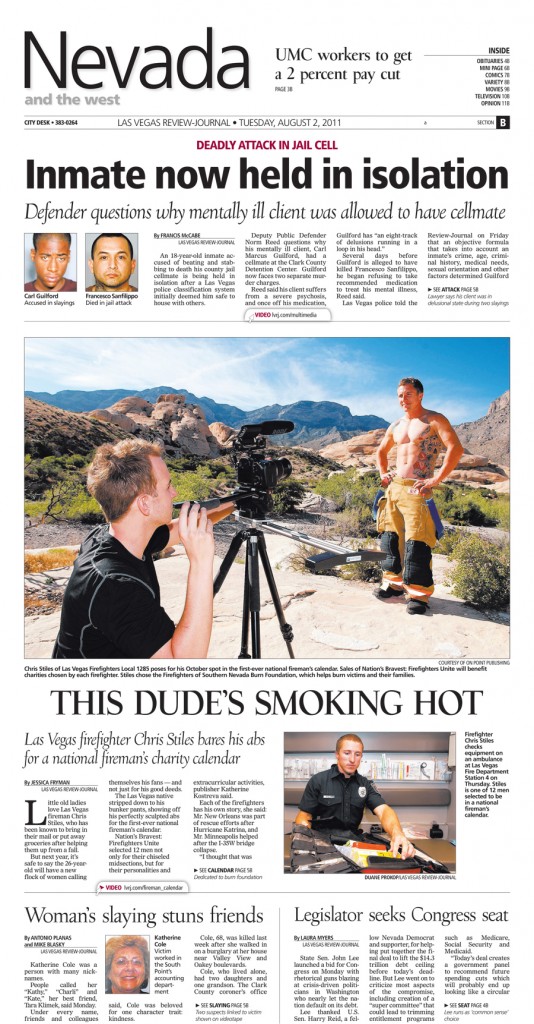 Nation’s Bravest: Firefighters Unite selected 12 men not only for their chiseled midsections, but for their personalities and extracurricular activities, publisher Katherine Kostreva said.

Each of the firefighters has his own story, she said: Mr. New Orleans was part of rescue efforts after Hurricane Katrina, and Mr. Minneapolis helped after the I-35W bridge collapse.

“I thought that was incredible. It makes the project truly about the nation’s bravest,” Kostreva said.

The calendar supports charities of each fireman’s choosing, including Mr. Las Vegas’ selection, the Firefighters of Southern Nevada Burn Foundation.

The foundation helps burn victims and their families. Stiles said he chose the nonprofit after working with the organization at toy drives and bachelor auctions over the years. He volunteered as a counselor in July for San Diego-based Camp Beyond the Scars, which the burn foundation helps support.

“It was life-changing,” Stiles said of the experience. “We complain about little crap in our daily lives, and then you see kids with severe physical ailments just happy to be alive.”

Stiles also is a volunteer with the Las Vegas Firefighters Local 1285 honor guard, which commemorates those who die in the line of duty. At funeral processions or other events, Stiles plays the tenor drum or carries the ax — noting that’s “the little guy’s job.”

Stiles joined Las Vegas Fire and Rescue six years ago, and he hopes to become a paramedic. The Durango High graduate represents firefighters Local 1285 in the calendar.

“I think it’s really nice that he’s so involved,” Kostreva said. “He has a great attitude.”

Stiles’ easy-going nature is a must, he said, especially because he’s one of the youngest and definitely the shortest on the squad.

“We get to make fun of him. I’ve helped him reach the hose,” joked firefighter-paramedic Matt Ongman, who has known Stiles for 10 years and worked with him for six.

Stiles, who is 5 feet 5 inches tall (in his boots), calls the taunting part of firehouse life. The calendar probably will bring even more heckling, he said, laughing, but that’s because the other firemen will be jealous.

And ladies, don’t worry, his crew’s prediction that Stiles will hold the slot for February, the shortest month, is a tease — the shirtless Mr. Las Vegas will be on display for all 31 days in October.